Turkey is in a sort of crisis, and it is reflected in the property market. One symptom is a very high level of inflation which means that the apparent rise in Turkish property prices doesn't reflect reality.

In fact when adjusted for inflation, property prices are falling. There are high interest rates, a stalling economy, a plunging currency, and a debt buildup - all of which is not exactly a full-scale economic emergency but might be described as economic influenza.

For locals, this means that for a couple of years there will be low growth, rising unemployment, and declining property prices.  For foreigners, the currency's devaluation means that the property market is very attractively priced, which is luring many to Turkey.

House prices in Turkey fell by 9.2% during the year to November 2018 in inflation-adjusted terms, a sharper decline than the 1.5% inflation-adjusted price drop during the same period last year. Total sales of dwellings in Turkey have also fallen, declining by 2.41% in 2018.  In addition the Turkish Lira's value has fallen dramatically against the US Dollar, which has helped encourage a large rise in foreign purchases of real estate, primarily by buyers from the Gulf.

Foreign ownership in Turkey is ruled by the reciprocity principle. Citizens of countries that allow Turkish citizens or legal entities to own property in their country are allowed to acquire property in Turkey. Citizens of most EU countries (except for Belgium, Cyprus, Czech Republic and Slovakia), the United States, Canada and other countries in Asia, Latin America and Africa can freely purchase properties in Turkey.

Turkey has granted citizenship to foreigners through various means since January 2017, which includes purchasing property worth at least US$ 1 million. New regulations were introduced in September 2018 cutting the investment amount required for Turkish citizenship:

In 2017, the government introduced other measures to entice foreign home buyers:

Prices per square metre for apartments in Istanbul have declined dramatically in dollar terms, and now range from €1,100 to €4,600, but this very large range obviously depends enormously on location. Apartments in the marvellously attractive Bebek district of Besiktas are much more expensive than in most other parts of Istanbul, with prices of around €4,600 per square metre. The decline in prices (valued in dollars) has taken place despite a continuous rise in home prices in local terms and is largely due to the dramatic decline of the Turkish New Lira under Turkey's all-knowing, all-wise President Recip Erdogan.

In Istanbul, the gross rental yields on apartments - the return earned on the purchase price of a rental property, before taxation, vacancy costs, and other costs - range from 2% to 4.7%.

Rental Income: Net rental income is taxed at progressive rates, from 15% to 35%.

Inheritance: Inheritance tax is imposed on the value of the inheritance at progressive rates, from 1% to 10%.

Residents: Residents are taxed on their worldwide income at progressive rates, from 15% to 35%. 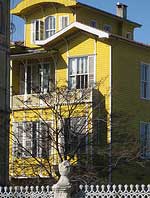 Rents: Rents may be freely agreed at the beginning of rental contracts. There is no other form of rent control in Turkey.

Tenant Security:The parties of the lease may specify any duration period they wish. The lease is automatically extended for one more year, unless the landlord informs the tenant in writing at least fifteen days before the expiration date of the lease that it cannot be renewed.

Weaker economy ahead in 2019

In 2019, Turkey's GDP growth is expected to slow to 2.3%, according to Finance Minister Berat Albayrak. However the IMF predicts growth of only 0.4% in 2019 due to "the weaker lira, higher borrowing costs, and elevated uncertainties weigh on investment and demand".  The Turkish economy sharply slowed to 2.6% in 2018 following last year's 7.4% economic growth, according to TurkStat.  Turkey's fourth quarter economic performance was dismal, with a GDP decline of 3% y-o-y, according to TurkStat.

Construction permits for dwellings sharply fell by 58.6% during the first nine months of 2018 to around 485,356 units, according to the Turkish Statistical Institute (TurkStat).  This was in contrast to 2017, when dwelling permits rose by 36.1%, with permits for two or more dwelling residential buildings up by 36.3% on the previous

"We will see a gradual growth increase from now on. Our main goal is to establish 5 percent growth from 2021 onwards," said Finance Minister Albayrak.

Unemployment stood at 12.3% in November 2018, an increase by two percentage points from last year's 10.3%, according to TurkStat.

President Erdogan has long held eccentric views on monetary policy, believing that inflation is caused by high interest rates which he has dubbed the "mother and father of all evil".  His views cowed the monetary authorities, and the result has been inflation, pushing the lira down. This is ironic because Erdogan's period in office began with a conspicuous display of fiscal orthodoxy, causing housing loan rates to decline sharply from an average of 48.43% in 2002 to just 9.7% in 2013. This was one of the great successes of Turkey´s AKP government.  However as inflation took off housing loan interest rates started to rise again to double digits and by December 2018, the average interest rate was 27.39%.

Rising inflation sapped the currency, but the lira's sharp nosedive in August was partly attributable to Turkey's worsened relationship with the US, which raised import tariffs on Turkish steel by 50% and on aluminium by 20% in protest at the detention of American pastor Andrew Brunson, who is facing charges in relation to the failed coup attempt in 2016.  The Turkish Lira plunged to a record low of TRY 7.2362 per USD in August 2018.  The lira had by then lost more than 40% against the US dollar since the beginning of 2018.

The trade dispute intensified investors' fears.  Turkey has amassed a large amount of foreign-currency debt due to years of current account deficits, but does not have sufficient reserves to support its liabilities. The current account deficit widened from US$ 33.1 billion in 2016 to US$ 47.3 billion in 2017, according to the Central Bank of the Republic of Turkey (CBRT). Meanwhile, gross external debt has grown from 47.3% of GDP in end-2016 to 53.3% of GDP by the end of 2017.  The plunge of Turkish Lira has made paying the interest on the foreign-currency debt difficult.

In September 2018 the authorities bowed to the inevitable.  The central bank raised the key interest rate to 24% from 17.75%, noting that it had decided "to implement a strong monetary tightening to support price stability”.  The Turkish lira began to recover.  In January 25, 2019, the exchange rate closed at TRY 5.2722 = US$ 1.

Inflation in February 2019 was 19.67%, almost quadruple of the central bank's 5% target, but down from 20.35% the previous month. The slowing of inflation started after Turkey announced tax cuts which became effective in November 1, 2018, including an extension of the VAT reduction in housing sales from 18% to 8% until next year, and a lowering of the title deed fees rate from 4% to 3%, among others. The tax cuts were the government's attempt to mitigate inflation and stimulate demand.

Another 5-year term for President Erdoğan
In the local elections of 31st March 2019, the governing Justice and Development Party lost in Istanbul and Ankara.  In Istanbul the winner was the secularist Ekrem Imamoglu – a result which was swiftly challenged by the ruling party.

Imamoglu is a quiet compromiser, a complete contrast to the firebrand President. In its early years, Turkey´s AKP government was seen internationally as the Islamic equivalent of Europe´s Christian Democratic parties.

However in recent years President Erdoğan has become increasingly authoritarian. Many journalists are in prison, violence against demonstrators is common, a bizarre purge of the military and of those associated with the Gülen movement has undermined judicial independence, and Erdoğan himself has been implicated in a wide-ranging corruption scandal.

In July 2016, President Erdoğan´s government was tested by a coup attempt by the faction within the Turkish Armed Forces, the "Peace at Home Council". The coup was suppressed by the military, but left 300 people dead, more than 2,000 others injured, and more than 6,000 people arrested.

The government linked the failed coup to Fethullah Gulen, a Muslim cleric who leads a popular religious movement. A series of purges has followed, with many arrests, and many firings, targeting people allegedly affiliated to Gulen´s movement, but in fact spreading much wider.

In April 2017, a constitutional referendum was held to approve 18 proposed amendments to the country´s constitution. The "Yes" vote narrowly won, garnering 51.41% of the total, against "No" votes with 48.59%. Just a year after the referendum, in June 2018, Turkey held a general election in which President Erdogan won another term, now as Executive President ― taking on roles as the country's head of state and head of government, with 52.6% of the votes.

In parliamentary elections the same day as the presidential elections, the People's Alliance ― consisting of AKP and MHP - won a total of 344 out of 550 seats in parliament.

Emergency powers over the economy and financial system were granted to President Erdogan by parliament in January 2019, allowing him to take  all measures needed in case "negative developments" occur, and establishing a Financial Stability and Development Committee under the Treasury and Finance Ministry's supervision.

However the latest elections suggest that not everyone is happy with the President – particularly in the big cities.

Where to buy property in Turkey