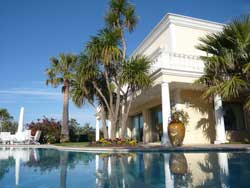 Monaco’s quest to build its brand as a prime luxury residential city and tourist haven for the extremely wealthy during the last three years had proven effective amidst the raging financial crisis.

Permanent residence and rentals in Monaco are so far the most expensive in the world, according to the latest research conducted by Global Property Guide.

Monaco maintained its title as the world’s most expensive luxury residential market for the fourth straight year because of demand from wealthy buyers taking advantage of tax privileges.

Monaco’s Avenue Princesse Grace might have been the most expensive street in the world, but prices for prime property there have fallen from a staggeringly high $120,000 per sq/m a year ago.

London was the second most expensive city at US$20,505 a square metre, while rents stood at US$8,830. According to the Wealth Report, owning a residential property at the Kensington Palace Gardens is still as prestigious.

In spite the financial crisis raging in Europe, five European countries were ranked as among the most expensive cities by the Global Property Guide Research. Aside from UK’s London, the eclectic Paris of France has been ranked 4th; Russia’s Moscow is 6th; and Switzerland’s Geneva is on the 10th.

Four Asian countries made it to the list of Global Property Guide’s most expensive cities: Hong Kong, Singapore, Tokyo, Japan, and India’s Mumbai.

Hong Kong’s return under the rule of mainland China did not affect the island’s expensive residential property rates. Hong Kong has been ranked third with property prices placed at $19,323 and rentals at $6,235.

India’s city of Mumbai took the 9th spot as it defined itself with the upscale market having the 27-storey palatial home complex of Mukesh Ambani at the Altamount Road, Mumbai. 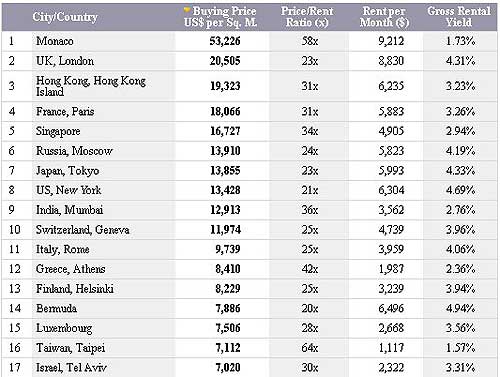