Globally, we are witnessing the biggest and most extensive house price boom in recorded history, both in terms of the number of countries experiencing real house price gains, and the number of successive years that house prices have been rising.

However, while property in much of the developed world is at historic peaks, property prices in most Asian countries are well below peak levels. Here, the Global Property Guide explores why. 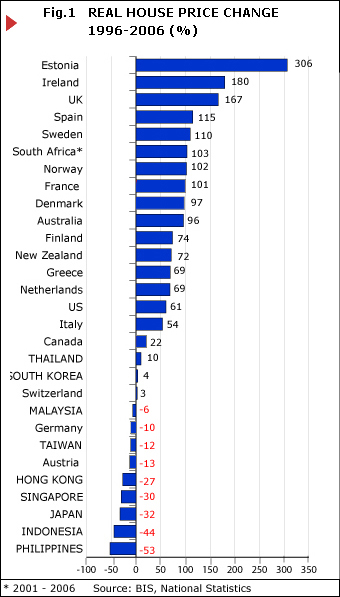 Essentially property prices in Asia have lagged for three reasons:

The Asian crisis caused an interruption in banks making mortgage loans available to borrowers at anything near acceptable interest rates and a reduction in the willingness of the banks to lend. When this period came to an end, at different times in different countries, the fizz returned to Asian housing markets.

Demand is now growing strongly, and developers are racing to meet supply, though rising global interest rates have recently somewhat dampened the euphoria.

Among the 40 countries monitored by the Global Property Guide, European countries are at the forefront of the global house price boom (Figure 1). House prices in Estonia rose by 300% from 1996 to 2006, in real terms, Ireland by 180% and UK by 167%. Other countries that experienced doubling of prices include Spain, Sweden, Norway and France.

Outside Europe, countries participating in the boom include Australia, New Zealand, the US, and South Africa.

While much of the developed world is experiencing house price booms, much of Asia is down. Property prices in the Philippines dropped by 53% in real terms from 1996 to 2006. Residential real estate prices in East Asian countries peaked in early to mid-1990s at the onset of the Asian crisis.

House price booms are typically accompanied by mortgage market booms. There is a strong link between mortgage growth and house price rises.

As observed in countries experiencing housing and mortgage booms, economic conditions conducive to the growth of mortgage market include: 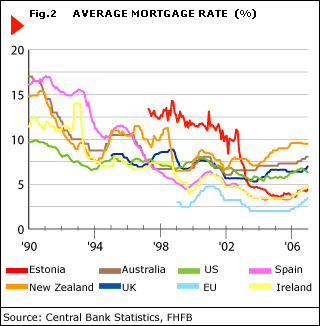 In most developed countries, different packages are available to borrowers, combining the different attributes of FRMs and ARMs. There are hybrid-ARMs where the interest rate is fixed for 1 to 5 years, and is then adjustable. Mortgages with interest rates fixed for more than five years are regarded as FRMs.

So, why do certain households and countries prefer adjustable over fixed rate mortgages?

So what determines what mortgages the lenders prefer to offer?

Government regulation can be important. In most countries, regulators limit the amount of risks lenders can take. But even more important is the lenders' funding source. Lenders typically offer ARMs if their main source of funding is based on short-term interest rates, such as bank deposits.

Countries which primarily rely on fixed rate mortgage products include the US, Canada, and Continental Europe, where bonds and asset-backed securities are the main funding source. On the other hand, those that rely predominantly on adjustable rate mortgages include the UK, Ireland, Estonia and other leaders of the house price boom, where funding is based on short-term interest rates, such as bank deposits.

In Asia, despite the prevalence of adjustable rate mortgages there are no continuous and rapid house price changes. High interest rates caused by the Asian crisis have dampened the market. 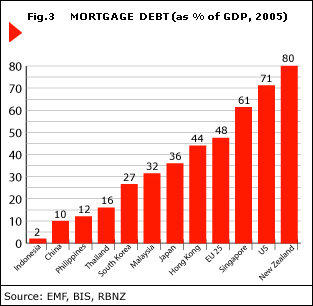 Looking at basic mortgage market indicators (Table 1), the maximum loan to value ratio for new loans in most Asian countries is either 70 or 80%, with maximum loan terms of 20 to 30 years. However, actual loan terms and LTV ratios of approved loans are much lower.

Most housing loans are hybrid adjustable rate mortgages, typically fixed for one to three years, because banks are the main providers of mortgages in Asia. In Indonesia, most mortgage rates are fixed for only 6 months. In Japan, the most common mortgage package has fixed interest rates for 3 years, and then, adjusted semi-annually.

Mortgage rates for ARMs offered by commercial banks are generally affordable, at interest rates below 8% in most Asian countries (Table 2). Exceptions are the Philippines and Indonesia, which have the highest and most unstable inflation among the countries under consideration.

China's mortgage market was liberalized only in 2005, partly explaining why its size is small. Despite the liberalization, Chinese banks do not price loans in terms of costs and risks, but give discounts up to 15% on the benchmark one year loan lending rate set by the People's Bank of China.

Base interest rates for mortgages (presented in Table 3) rose rapidly during the Asian Crisis (Figure 4). They gradually went down, and there was then a period of interest rate stability between 2003 and 2005. However, when global interest rates started rising, rapid and continuous interest rate hikes were observed in the region.

Arguably, were it not for the institutional preference for FRMs in most European countries, it is likely that households would prefer ARMs, and indeed there is evidence of a 'creep' towards ARMs. On the other hand in most of Asia, households take ARMs simply because they have no choice and this has generally meant both a high interest rate, and also an uncertain and volatile interest rate. 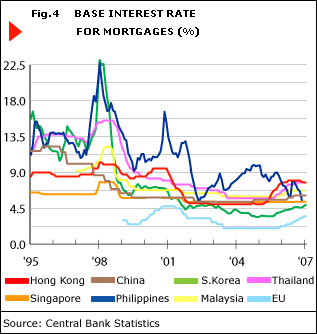 Before the crisis erupted in late 1997, there was a large amount of investment in real estate across the region, in an atmosphere of general economic euphoria. Property prices rose rapidly, and cities were full of new projects. Post-crisis, the very high interest rates caused most real estate loans to default, and many construction projects were halted. A lot of luxury and mid-level condominium units stayed unoccupied. Property prices stagnated or fell.

The high level of NPLs is indicated below (Figure 5). Cleaning the loan portfolio of bad assets was necessary before banks could issue new loans. As late as 2005 the NPL ratio still remained quite high in several Asian economies. It is only relatively recently that the situation has normalized, and the data for 2006 shows NPL ratios below 5% in most Asian countries.

Property prices fell by 20 to 50% in most countries in real terms between 1997 and 2003 (Figure 6). The real estate market started to recover first in Thailand, Malaysia and South Korea. By 2006, prices in these countries were at the same level as they were in 1995, in real terms.

Late comers to the recovery were Hong Kong, Singapore, and the Philippines. The recovery of Hong Kong was disrupted by the rise in interest rates, and Thailand's political uncertainty has adversely affected the real estate market.

In Indonesia, inflation, the bombings in Bali and Jakarta, the Asian tsunami, typhoons, earthquakes, volcanic eruption and flooding have all affected the market.

With the recovery of Asia's economies and real estate markets, Asia's primary mortgage markets have also expanded because of:

However, a lot of challenges still confront Asia's housing markets. One factor is that housing in Asia is relatively expensive.

A 35 sq. m. condominium unit in the city center costs around 6 to 30 times the annual average income in most Asian cities (Table 4). Ratios between 3 and 5 are regarded as affordable.

There are structural reasons for these high costs. Roundtrip transaction costs are high in several Asian countries, exceeding 10% of property values in the Philippines, South Korea, Indonesia, Taiwan and Thailand (Figure 7). In these countries, the bulk of the costs are accounted for by real estate agent's fees and sales and transfer taxes. It is worth noting that countries with the lowest transaction costs do not charge additional taxes on top of registration fees. Low transaction costs can stimulate market turnover and enhance the responsiveness of housing markets to macroeconomic stimuli. 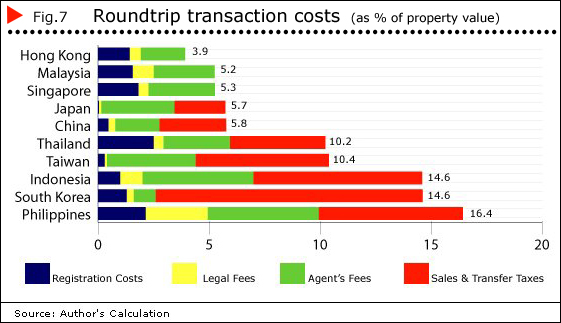 In addition, the mortgage and real estate markets are still crippled by excessive government intervention.

Foreign ownership limits on banks, corporations and real estate restricts the amount of funding available and the level of competition, leading to inefficiencies.

There are also specific structural challenges. Inadequate information, for instance, is a hindrance. Several countries still lack uniform national standards for property valuation and mortgage registration. In the Philippines, for instance, there are at least 23 government agencies undertaking real property appraisal, using their own system and methodology.

Credit risks remain high due to the insufficient credit information and credit management mechanisms. The establishment of credit rating bureaus and sharing of credit information can enhance the mortgage market. Real estate data are typically limited to major cities. The house price indices of several countries have limited scope and are not regularly updated.

The huge informal sector in Asia often leads to ill-targeted housing programs. Given a large informal labor market, housing finance systems remain inaccessible to the majority of the population. In Indonesia, 74% of the labor force does not earn documented and stable wages. In the Philippines, the need to show income tax return to secure loans limits potential applicants to just 6 million out of 55 million.

Asia missed the house price boom because of the Asian crisis. The crisis caused high interest rates, an economic slowdown, and a property crash, reducing consumer willingness to take on housing debt. High default rates in portfolios discouraged banks from lending. So in the worst affected markets, there was neither supply nor demand for mortgages.

Now signs of change are everywhere. Asia's property markets are now growing, and banks are willing lenders of mortgage loans around the region. In some countries, the long period during which loans were effectively unavailable means that supply is low, and rents are relatively high, leading to good rental investment returns for investors.

The worry is all in the other direction will Asia's housing market heat up too much?

There are still structural challenges hounding Asia's real estate and mortgage markets. Yet almost a decade after the Asian crisis, the enormous potential of the Asian housing markets, their size, population, rate of economic growth and urbanization, are ripe for the picking.