The new rental law in Dubai is PRO-TENANT, even though initial rents are freely determined. Rent increases are subject to government’s rent cap policies and strong security of tenure is given to the tenant.

Rents: Can landlord and tenant freely agree rents in UAE?

Parties may freely agree on the initial rents. However, during the first two years of the tenancy contract, no rent increase is allowed.

At renewal of the tenancy contract, the landlord and the tenant were previously allowed to decide on a new rent level. However, with the new rental law in place (Decree No. 1 of 2009), rent increases for contracts renewing in 2009 were not allowed if existing rents are equal to or less than 25% of the new rental index set by the Real Estate Regulatory Agency (RERA). Where existing rent is below this threshold, rent caps apply.

Prior to occupancy, the tenant is required to remit a security deposit equivalent to 5% of the annual rent. The same amount is usually refunded to the tenant upon termination of the contract.

An additional deposit of AED1,000 (US$272) to AED2,000 (US$545) must be paid to the electricity and water provider (DEWA). Some emirates also expect tenants to pay municipal tax on the leased property.

Rents are normally paid in advance for the entire year, either in cash or cheques. If the tenancy contract does not explicitly state when rent payments are to be made, rents a year must be paid in four equal installments in advance.

What rights do landlords and tenants have in
UAE, especially as to duration of contract, and eviction?

The Tenancy Law of 2007 mandates that the tenancy relationship shall be stated in a written contract and registered with RERA. The law also states that a tenancy contract cannot be unilaterally terminated by one party without the consent of the other party.

If either party wishes to prematurely terminate the contract, three month’s notice must be given. And in the case of a landlord, a “just cause” of eviction must be included in the notice before he can be legally allowed to evict a tenant, including:


How effective is the UAE legal system?

Landlord and tenant disputes are submitted to and executed by the Rent Committee. However, tenancy contracts not registered with the RERA cannot be referred to the Rent Committee or any government authority for dispute resolution.

The committee takes action on rent disputes only if a tenant or a landlord formally files a complaint. The complainant needs to pay 3.5% of the annual rent as a fee to the committee. If the complainant wins the case, he will be reimbursed with the amount he paid while the losing party will bear the expense.

The Rent Committee is normally pro-tenant on its rulings, considering that a large number of landlords attempt to exploit tenants by charging unreasonable rents.

The “Law Regulating the Relationship between Landlords and Tenants in the Emirate of Dubai No. 26 of 2007” known as the Tenancy Law came into effect on February 29, 2008. The law covers all rental properties in Dubai except for hotel establishments and properties provided by companies to its employees as free housing.

Then in early-2009, the “Decree No. 1 of 2009 Governing Rentals in the Emirate of Dubai” was issued to control rent increases for renewing rental contracts in 2009. 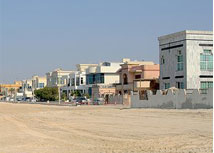 However, RERA has come under criticism because the new rent figures were much higher than current rental rates in the market. The rental index, compiled during mid-2008 (at the height of the property boom and before the fallout from the global financial crisis), gives an inflated view of rents in Dubai. The discrepancy caused uproar and confusion among tenants who were left watching their landlords hike their rents to unwarranted levels.

This prompted RERA to update the new rental index earlier than planned. The revised index is due to be released in April 2009. Those tenants who have not yet renewed their contracts are likely to hold on to their old contracts until the new index is released.

Is it worth buying in Dubai right now?