Landlord and tenant law is pro-landlord

Rent: Can landlord and tenant freely agree rents in Brazil?

Any contractually-agreed readjustment of the rent must occur annually, based on an index stipulated in the contract. The index stipulated in the contract for readjustment of the rent cannot exceed the official rates. If the contract is silent about the rate, or if there is disagreement about the achieved value, both owner and renter can ask judicially for its revision based on the fair market price, as long as it has been three years from the date that the contract was signed. Note that the revision can either increase, or alternatively decrease, the rent.

The landlord cannot demand that the rent should be paid in advance, except in cases of temporary leases which may not exceed 90 days.

The deposit is usually the equivalent of three months of the stipulated value of the lease, and will be restored to the tenant at the end of the contract.

Other types of guarantees related to the lease of real property include a surety bond, and the use of a guarantor, i.e., a third person responsible for paying any unpaid rental debts of the tenant. Both corporations and individuals are entitled to be guarantors, but given the risk, it is usually a close friend or a member of the renter's family. The guarantor must possess at least two real properties.

By law, the landlord can ask no more than one type of guarantee from the tenant, under penalty of nullity of the clause.

What rights do landlords and tenants have in Brazil, especially as to duration of contract, and eviction?

Residential lease contracts usually have a minimum duration of 30 months. At the end of that period the proprietor can recover his property without stating reasons and is not obligated to renew the contract. However, if the tenant stays in the property after that term for more than 30 days without being given notice to quit by the owner, the contract is automatically renewed, but with an undetermined duration (to which different regulations on eviction apply, see below).

It can be agreed that the lease will last less than 30 months, though it rarely happens. In that case, if the vacancy of the property is not requested by a written document, the lease automatically renews, and the recovery of the property can only take place in the following special cases:


The parties may also stipulate a pecuniary penalty for violation of the lease contract, usually being the value equivalent to three months of rent. Also very common is to agree that the tenant will be exemption from the penalty for leaving the property before the contracted period, if it has been at least one year since the contract was signed.

Brazilian law gives the right of first option to the tenant in case the landlord desires to sell the property. Therefore, the owner must give a notice to the tenant, giving him 30 days to manifest his interest.

Tenants must make sure that their contract is registered in the real estate registry office, due to the possibility of the property being sold while it is still leased. If not registered, the new buyer will not be obligated to honour the lease agreement, and need only give the tenant 90 days notice to relinquish the property.

How effective is the Brazilian legal system?

The duration of lawsuits concerning tenant eviction varies by State. Courts in Brazil tend to be saturated, due to the volume of lawsuits.

In some cases, the eviction can be determined by an injunction which will give 15 days for the tenant to leave, for instance when the original tenant dies leaving unauthorized individuals in the property. 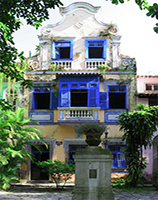 The rules for leasing urban real properties and its legal procedures can be found in the law 8.245/911. The Civil Code can also be used as subsidiary source of legislation.

In 1991, the present legislation consolidated in one law all matters regarding urban real property rent, including its legal procedures by the law 8.245/91, known as Lei do Inquilinato.