Nonresident UK property owners are taxed on their properties located in the UK, subject to certain exemptions and reductions given in double tax treaties. Couples and registered same sex partners may be taxed either jointly or separately.

Route 1: Pay income tax upfront (withholding tax).
Unless nonresidents take specific steps (see below) they will be taxed on net rental income sourced from the UK at a flat rate of 20%, which must be withheld by the tenant or letting agent, if there is one. In cases where the landlord does not have a letting agent, and the weekly rent exceeds £100 (€133), the tenant must usually withhold taxes from payments made to a nonresident landlord. 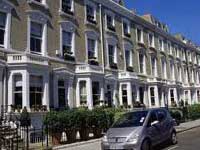 Certain expenses may be deducted from gross rental income, including costs incurred for business purposes and not of a capital nature. However, only expenses incurred by the tenant or letting agents may be deducted. Letting agents and tenants are sent manuals by the Inland Revenue to guide them through the process of taxing the landlord. In the case of vague expenses, the tenant or agent must be ´reasonably satisfied´ that the expense is legitimate before deducting.

No personal allowances are available to those who choose this route.

Where there isn´t a letting agent, the process could be a considerable burden upon the tenant and tenants may simply refuse to participate, in which case the landlord may opt for the second route.

Route 2: Receive untaxed income now and pay tax later.
A nonresident landlord may opt to receive his rent untaxed, and choose to file a tax return instead. He will need to fill in form NRL1 (for individuals) or NRL2 (for companies) or NRL3 (for trustees, from the Centre for Non-Residents). Note that each spouse receives the benefit of allowances.

This option may be rewarding for those nonresidents eligible to claim UK allowances, who include:


Under route 2, rental income is subject to the following income tax rates:

A furnished holiday letting is available for lease to the public for at least 140 days during the year, and is actually let for at least 70 of those days. It is let at a commercial rate and it is not continuously occupied by the same person for more than 31 days within seven months of the same year. The 70-day rule can be satisfied even if some of the landlord´s units were let for less than 70 days so long as both the 140-day and 7-month rules are satisfied by all of them.

The landlord may deduct the costs incurred solely for earning business profits and claim capital allowances (normally, at more than 40% of cost in the year of purchase, and at 25% of remaining cost for the succeeding years) or renewals deduction for the capital assets he bought.

The landlord may offset losses against total income. He may also carry the losses forward for set off against future letting profits.

Indexation and tapering reliefs have been abolished along with the entire previous income-tax based CGT system. However, a £40,000 (€53,333) letting relief is available for each taxpayer.

If the house was the principal residence throughout the owner´s period of ownership, no CGT is payable, and proportional reliefs are available

What does "resident" mean? An individual is always deemed resident if he is present in the UK for more than 183 days.

UK residents who leave the UK. If an individual is a UK resident, and he goes abroad permanently, he will be treated as remaining resident and ordinarily resident if his visits to the UK average 91 days or more a year.

If an individual leaves the UK to work full-time abroad under a contract of employment, he is treated as not resident and not ordinarily resident if he meets all the following conditions:

Regardless of employment, if an individual has left the UK permanently or for at least three years, he will be treated as not resident and not ordinarily resident from the day after the date of his departure providing

Council tax is a tax set by each locality on UK properties that may be used as dwelling, regardless of whether owned or rented. Fifty percent (50%) of the tax payable is based on the property band (A-H) to which the property belongs. The other 50% depends on the number of persons living in the property. If a person, of legal age, lives alone in the property, the taxpayer may avail of the Single Person Discount and the second 50% may be reduced to 25%.

Where there is an assured tenancy (the normal case) the tenant pays the tax. However if there are no tenants, property owners are usually liable for this tax.

What lessons can property investors learn from the last economic crisis?