Where to buy property in Wicklow, Ireland 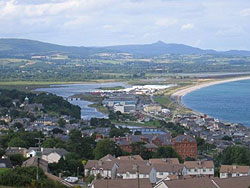 Less than an hour away from Dublin, the county of Wicklow along the Irish Sea coast has also become known as the Garden of Ireland. The Wicklow Way, the oldest long distance hiking path in Ireland with waymarkers, is traditionally walked north to south. Along the route, hikers will come across a 19th century British army barracks that has been turned into the Glencree Centre for Peace and Reconciliation, a non-profit organization that is devoted to peace-building and reconciliation among the people of North and South Ireland and Britain. Also found in Wicklow is the old Glendalough monastery.

The county seat is Wicklow. Its largest town is Bray, which is essentially a suburb of Dublin. The other major towns, like Greystones and Arklow, are mainly found on the east coast.