Where to buy property in Volga Federal District, Russia 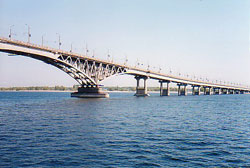 The size of Russia is such that the 1-million-square-kilometre Volga Federal District is one of its smaller regions. Situated in the southeast corner of European Russia, the district has a population of more than 31 million. Its climate is continental, with winters that are milder than in most other parts of Russia.

Running through this district is the mighty Volga River, flowing for 3,700 kilometres from the Valdai Hills northwest of Moscow and through the major cities of Nizhny Novgorod, Kazan, Samara and Volgograd until it drains into the Caspian Sea in the southeast.

The heartland of Russia, the Volga Federal District was an important trade route region in the past due to the river. Many ethnic groups have populated the Volga area over the centuries; thus it is home to a variety of historic structures.

Along the banks of the famous river that gave the district its name are old mosques and Lutheran churches, remnants of the Tartars and Germans, along with vintage Russian buildings. Next to the Russians, the Tartars are the most dominant group in the district, currently numbering 6.6 million. But only a small German enclave remains.

The dissolution of the Soviet Union led to the cultural rejuvenation of the Volga region. There has been a resurgence of river trade, and the various ethnic groups freely practise their traditions once more. Cities that were closed to outsiders in the Soviet era are now open once more.

The Volga River is the main attraction of this district. Europe's longest, largest river is wonderful for swimming, boating, and fishing. Tourists enjoy cruises on the river by steamboat to Moscow or St Petersburg or to any of the district's beautiful citiesKostroma, Myshkin, Yaroslavl, and Uglich. Its verdant banks are an excellent site for hiking and bird-watching as well.

Another important and picturesque body of water in this area is Lake Seliger, an enormous lake surrounded by dense evergreen forest. This is a favourite camping and fishing site with locals. Towards the evening, glorious sunsets may be seen here. In the midst of the lake is a romantic little island where the hermitage of Nilova Pustyn stands. Now there are also a Buddhist retreat and health centres near the island's mineral springs.

Currently the district's official capital is Nizhny Novgorod, but other places are vying for the position, being nearly equal in terms of overall development, economic significance, and population size. The Republics of Tatarstan and Bashkortostan, the Samara Regions and Perm Territory are the most formidable in terms of development, being highly industrialised. The Nizhny Novgorod Region and the Udmurt Republic are mainly industrial as well, while the Orenburg and Saratov Regions to the south have a combination industrial and agricultural economy, experience economic difficulties, and are less developed.

Nizhny Novgorod is Russia's third largest city and the site of many historic structures. The city's most famous landmark is its kremlin, a medieval red-brick fortress that overlooks the Volga River. Other attractions include the city's two medieval abbeys, some Baroque-style churches, the Saviour Cathedral, and the New Fair Cathedral. Nizhny Novgorod also has a major art gallery that houses an important collection of Russian artists works.

The city is also famous for its unique folk arts, from the charming Russian nesting dolls to intricate laces and filigree, from needlework to knives. Since ages past this city has been a popular site for trade fairs.

Nizhny Novgorod is also a major centre for engineering and information technology.

Kazan is the capital of the Republic of Tatarstan and the centre of Islam in Russia. It has many fascinating examples of architecture and historic sites. The imposing S'uyumbeki Tower is its most prominent landmark and the symbol of the city. The tower is part of the city's lovely kremlin, where you can also find the 5-domed Annunciation Cathedral, the remnants of the Saviour Monastery, and one of the largest mosques in Europe, the Qol-arif Mosque.

The population of Kazan is mainly composed of Tatars and Russians.

Interesting places nearby include the small towns of Sviyazhsk and Yelabuga, which lie next to an archaeological site known as the Devil's Settlement that is actually the ancient fortified village of an old tribe.

Samara is a city along the banks of the Volga with a population of over a million. It is known for its long scenic embankment. It has the atmosphere of a resort, and the nearby Mastryukovskie Lakes has long been the site of many open-air music festivals that draw thousands of romantics, who sit by campfires, listening and singing along. It also has the oldest beer-making tradition in Russia.

This city is also the site of Stalin's 37-kilometre-deep underground shelter, built under a school. There are also caves in the suburban areas.

Ulyanovsk is the birthplace of Vladimir Lenin. The area is associated with aviation, and one of its most fascinating sites is an aircraft production factory, which was once closed to outsiders. You can try out an aircraft simulator at the Civil Aviation Centre.

Tolyatti is a centre of industry, famous as the site of the Volga Automobile Factory. Yet the city has a fairly clean atmosphere and is surrounded by woods populated with deer, foxes, squirrels, and hares. The pine forest in its downtown area is reputed to have been planted by French military prisoners incarcerated here in the 19th century.

Saratov is one of Volga's largest cities. This historic district on the right bank of the Volga River is associated with the 17th- and 18th-century peasant revolutionary leaders Stepan Razin and Yemelyan Pugachev. The city has historically had many German and other European immigrants. Some of the loveliest homes in Saratov were owned by rich German millers in the 18th century. These families played an important role as philanthropists and patrons of the arts. In this area you will also find the landing site of Yuri Gagarin, the first man to go into space.

Astrakhan is an ancient city spread out on several islands. The centre of fishing on the Volga and the Caspian Sea, it has great reserves of sturgeon, which along with beluga is the source of the world-famous Russian caviar.

Sport fishermen worldwide are drawn to its delta area where large fish can be caught. This is also a popular place for hunting geese and other waterfowl. The Astrakhan territory is being developed as a tourist site, with a special appeal for outdoor enthusiasts. There are now well-equipped modern campsites, floating hotels, and comfortable Volga river steamboats available.

Ostashkov is a small provincial town that is half a millennium old. The administrative centre of the Seliger region, it is known for its production of leather. Its main attraction is its gracious old architecture, as seen in the houses right at the water's edge on the Old Embankment and the famous Nilova Pustyn monastery, which is also an Orthodox Christian site. The Seliger Lake and the island where the monastery is located are sites popular for their romantic aura. The wonderful sunsets at Seliger Lake are especially celebrated.

Rybinsk is a small town that resembles St Petersburg in its street plan, and in the design of its buildings. It was a bustling centre of trade under the tsars.