Where to buy property in Veszprem, Hungary 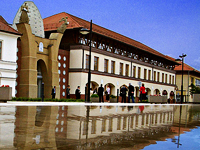 Covering the Bakony hills and the northern shore of Lake Balaton is Veszpr�m county. The county shares the same name as its capital.

The hills of Badacsony and Soml� call out to lovers of wine and grapes, as the sparkling Lake Balatan calls out to bathers. The hills of the Balatan Uplands offer a spectancular range of 200 hills across a sprawling green blanket. In the area is also the Upper Balaton National Park (Balaton-felvid�ki Nemzeti Park). Another beautiful natural site is the Stone Sea (Kotenger) of the K�l Basin (K�li-medence), a cavern known for its amazing rock formations.

This county is home to many old castles nestled in its sea of hills. There is the castle of S�meg, home to King B�la IV. There is also the gothic �jlaky castle in V�rpalota, with the only existing museum of chemistry in Central Europe.

Veszpr�m country offers other attractions. The abbey of Tihany for example is one such site. Founded by King Andrew I in 1055, still has in its possession the foundation document, which is the oldest written record of the Hungarian lanuage. Heart-shaped tombstones found in Balatonudvari are another curious attraction.

Veszpr�m country has many heritage museums. In Badacsonytomaj there is the memorial home of famous painter J�zsef Egry, which features two of his paintings, including Kil�t�s Fony�d fel� (The view of Fony�d), and Szent Krist�f a Balatonn�l (Saint Cristopher at Lake Balaton).

There is the Porcelain Museum of Herend which exhibits old photos, certificates, plaques and documents. Visitors may also try to make their own porcelain here. There is the Brick Museum (T�glam�zeum), as well as the oldest blue-dyeing workshop in Central Europe, P�pa's Museum of Blue Dyeing (K�kfest- M�zeum).