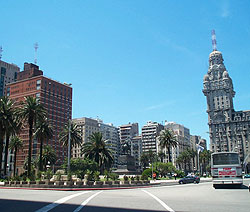 Uruguay is the second smallest country in South America, dwarfed by its two massive neighbours, Argentina to the west and Brazil to the east. Nevertheless, Uruguay manages to impress with its stable economy and political situation, its large and highly literate middle class, and its enviable social services. It is a land of rolling plains and low hills. Its beaches are pretty and popular, and its old colonial towns are well-preserved. Its capital city, Montevideo, was recently rated as having the best quality of living of all the cities in South America.

Uruguay was originally settled by the Portuguese in 1680 in the town of Colonia del Sacramento. The next hundred years saw Portugal battling against Spain for control of the region, which led to Spain’s gaining Uruguay in 1778. These tumultuous years were not without its cost, and it resulted in the total extermination of the indigenous people of the region.

Spain’s oppressive rule led to the Uruguayans’ successful revolt, but Portuguese-controlled Brazil then moved in and annexed the county. This again led to revolution. Noted personages such as José Gervasio Artigas and later Juan Antonio Lavalleja and his Treinta y Tres Orientales led the country’s fight for independence. They gained it in 1825 and set up the republic in 1828. After a 50-year period of factional strife, Uruguay prospered under President José Batlle y Ordoñez from 1903 to 1929. 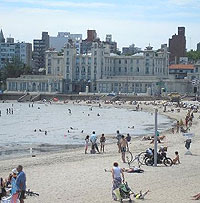 Worsening economic conditions and increasing left-wing terrorist activity in the 1950s and onwards led to a military coup in 1973. It put into power a brutal military regime that ruled and oppressed the people for 12 years. In 1984, the regime finally allowed the election of a civilian government. It took office in March 1985 and granted the immediate restoration of full political and civil rights. It has also focused its attention on improving the country’s economy, with moderate success.

Because its topography is characterized mainly by rolling plains and cuchillas (“wavy lands”, or low hill ranges), Uruguay’s economy relies heavily on its agricultural exports produced by estancias, or agricultural estates. It is from these estancias that Uruguay’s gaucho  roots were established. Its convenient location to Brazil and Argentina makes the country one of the premiere centres of trade in South America. 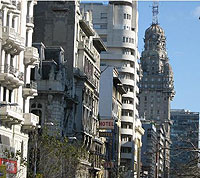 Uruguayans are proud of their heritage and their history. Well-preserved Portuguese and Spanish colonial buildings still stand in many of the towns and cities, and there are monuments to the country’s revolutionary heroes in parks, squares and museums. Music and dance are also integral to Uruguayan culture. Candombé, drum-based music of Afro-Uruguayan ancestry, is played in bars and dance halls all across the country. And Argentina may have invented the tango, but Uruguay’s contributions to the music and dance form include “La Cumparsita”, one of the most popular tango songs in history, and Carlos Gardel, the most famous tango singer of all time (though, thanks to confusing accounts of his early history, Argentina and even France also claim him as their native son).

Uruguay is the most secular country in South America. Although 66% of Uruguayans are Roman Catholic, religious freedom allows for the flourishing of Jewish and Protestant communities, as well as the rise of religions of Afro-Brazilian origin such as Macumba and Umbanda. In 2007, Uruguay became the first South American country, and the second in the Americas, to legalize same sex civil unions at a national level.

Find properties for sale in Uruguay