Where to buy property in Urals Federal District, Russia 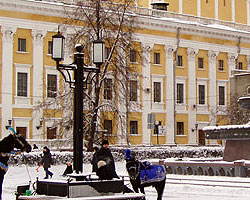 The most western district of Asian Russia, the Urals Federal District is vast, highly industrialised, and a major economic centre. The forested mountains that form its western border are a major source of lumber. There are also oil fields and mines of every kind. Industry is concentrated mainly in the south and the central areas. The northernmost part of the district is part of the polar region.

The Urals Federal District's capital, Yekaterinburg, is a huge centre of industry and transport and of science and culture. Other important industrial areas are found in Berezniki, Chelyabinsk, Magnitogorsk, Nizhni Tagil, Orsk, Orenburg, Perm, Ufa and Zlatoust. There are 112 municipalities in the entire district.

The district's capital, Yekaterinburg, is in the Sverdlovsk Region, which lies in the Middle and Northern Urals and in the far west of the Siberian territory. An enormous, highly industrial region, it is nearly 195,000 square kilometres in area. It is urbanised and very densely populated, with more than three times the average number of persons per square kilometre in Russia. It lies on the crossroads of major transport routes between the east and west of Russia. The Trans-Siberian Railway passes through the south of this region. One of Russia's largest airports, the Koltsovo International Airport, is here.

The administrative centre of Sverdlovsk, Yekaterinburg is a heavily populated major industry and transport centre. The Trans-Siberian Railway runs through the city. A few kilometres southeast of the city centre is Koltsovo International Airport.

Yekaterinburg is a science and technology hub, fourth in importance after Moscow, St Petersburg, and Novosibirsk. It is also growing into a centre of finance. It became the district capital in 2000, and the number of foreign consulates and embassies here has increased gradually. There are also more than 100 international companies represented here.

Lately Yekaterinburg has followed plans to develop into a centre of tourism, making use of its location along the border between Europe and Asia and its major international airport, Kotsovo. Hotels, commercial and entertainment complexes, and restaurants have been going up in the city lately.

Yekaterinburg is surrounded by forests and hills. The Iset River flows through the city, connecting three large city ponds.

Despite its progress as a modern urban centre, Yekaterinburg is perhaps still most known as the city where the Romanovs were assassinated. In the 1917 October Revolution, Russia's last tsar, Nicholas II, and his family were imprisoned by the Bolsheviks in Ipatiev House near the centre of the city, where they lived for three months until their bloody execution.

The house was demolished by local Communist Party boss Boris Yeltsin, on orders from Moscow, in 1977. However, memorials to the family have sprung up on the site, including the Church on Blood in Honour of All Saints, which is a Church on Blood (a Russian Orthodox church that honours the murder of a member of the imperial family) built in the Byzantine style that Nicholas liked.