Where to buy property in Tucuman, Argentina 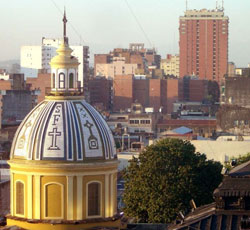 The small province of Tucumán has two different geographical systems: in the east, the flatlands of the Gran Chaco to the east; to the west, a mixture of the sierras of the Pampas and canyons of the Argentine northwest. Tucumán is largely undeveloped, although it is going through a strong growth spurt, pushed forward by its major international sugarcane industry.

While not exactly an urban centre, Tucumán is noted for its cultural and sport tourism facilities. It is a mid-stop for travellers visiting other provinces, and has the Panamerican Highway (Route 9) and the Benjamín Matienzo Airport to connect travellers to Santiago del Estero and Buenos Aires Provinces.

Known as “El Jardín de la República”, Tucumán’s capital city is a largely working-class area and yet also one of Argentina’s centres of culture. It has four universities, several churches, museums, theatres and performance centres, and a music festival held annually in the main square, the tranquil, tree-fringed Plaza Independencia.

For outdoors types, there are archeological sites and hiking trails in the valleys. The city is surrounded by sugarcane fields and citrus orchards.