Where to buy property in Panama 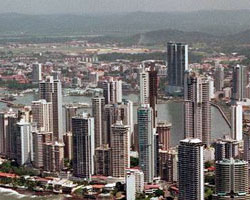 The Republic of Panama is the southernmost nation in North America. Panama boasts an abundance of wilderness and natural beauty complemented by a rising economy, fuelled by rapidly growing service and tourism industries.

One of Panama's most distinct features is the mountain range that divides the continent. This mountain range undergoes three name changes: in the northwest, it is the Cordillera de Talamanca, then it turns into Serrania de Tabasar�, and finally, it becomes the Sierra de Veraguas when it approaches the Panama Canal.

North-western and north-eastern Panama offer a wealth of white sand beaches: Surfers will truly get stoked in Bocas del Toro. There's cool hillside life in Boquete. Those seeking heritage experiences will be impressed at the number of indigenous tribes all over Panama. And the country has a large pristine rainforest.

Panama's service industries, especially banking, are on the rise, as well as manufacturing, shipping, and tourism. Trade is a major contributor to the economy, largely due to the Col�n Free Trade Zone. The export of coffee and other agricultural produce also boosts Panama's GDP.

Panama in practice adopted the US dollar at independence (by fixing its currency, the balboa, at parity to the US dollar).

History - The US invasion

Panama was conquered by the Spanish in 1513, and their rule lasted till 1821. In 1902 US President Theodore Roosevelt, wishing to take over the French work on the abandoned Panama Canal, offered military support to some landholding families, encouraging them to seize power. They then separated Panama from Gran Colombia.

In a bizarre twist of imperialism, the US then signed a treaty with an individual French citizen (who was not authorized to sign on behalf of Panama). The US then took direct control over the Panama Canal. US control only ended in 1999.

During the past 50 years, Panama's political history has been largely confined to a small elite circle of highly corrupt families.

Military dictatorships have alternated with democratic governments. In 1968, a coup toppled the democratic but corrupt Arias government, and brought in General Omar Torrijos (1968-1981), who instituted a reign of torture, clientilism, and infrastructure projects, spiced with demagogic populism.

Corruption, and yet more corruption

Torrijos' death in an airplane accident in 1981 was followed by the dictatorship of General Manuel Antonio Noriega (1983-1989). His involvement in drug trafficking led to a break with the US, and in 1989 Panama was Invaded by the US, leading to the death of 2-4,000 Panamanians.

Election winner Guillermo Endara was then installed as President by the US military. Endara was succeeded by President Ernesto P�rez Balladares (1994-1999), a former Noriega official with an immense fortune derived from Noriega's thefts. He pursued neoliberal structural reforms, including the privatization of state enterprises such as electricity and telecommunications, and the privatization of ports and some military installations in the former Canal Zone. Corruption was a major theme of his privatizations.

Balladares was succeeded by Mireya Elisa Moscoso Rodr�guez de Arias (1999-2004), wife of the former president Arias (who had been ousted by Omar Torrijos). Her government was a continuous drama of corruption scandals.

In a referendum in 2006, Panamanians approved a plan to expand the canal, by adding two new flights of locks, and new approach channels, including a 6.2 kilometre approach from Miraflores. The US$5.25 billion project will allow canal traffic to grow from 280 million tons in 2005 to 600 million tons. The new locks are expected to open in 2015.

A Trade Promotion Agreement between the US and Panama was signed in 2007, but implementation has been delayed.

Over the past 5 years, Panama has been the scene of an extraordinary real estate boom. That is partly because Panama is increasingly attractive to foreign retirees, with its proximity, climate, and low cost of living. But also, the impending expansion of the Panama Canal is driving foreign investment, and consequently, more expatriates are arriving to do business in the canal zone.

Find properties for sale in Panama

Search for properties in Panama