Where to buy property in Manipur, India 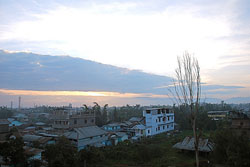 Foreigners entering Manipur, in India's extreme East, must possess a Restricted Area Permit. Permits are valid for only 10 days. Visitors must travel only on tours arranged by authorised travel agents, in groups of four. Furthermore, they may come to the capital, Imphal, only by air, and may not travel outside the capital.

An insurgency has raged in Manipur since 1964, becoming more violent since1978, led by the dominant Meiti ethnic group. The international Human Rights Watch has drawn attention to human rights violations by Indian Security Forces. There is also considerable ethnic conflict between Meitis (mainly followers of the ancient Sanamahi religion), and other tribes, such as the Nagas and Kukis (mostly Christian), and the dominant city-dwelling Hindu Vaisnavas.

Manipur has a lovely mild climate, thanks to the protective mountain ranges which shield the lowlands from chilly northern winds and block off typhoons from the Bay of Bengal.�It is set among rugged hills, narrow valleys and broad plains. Its culture includes theatre, sculpture, martial arts, and dance forms. The state also boasts some unique attractions, such as rare species of flora and fauna and Loktak Lake's floating island.

Winters can be cold, with temperatures at times falling below zero. The highlands sometimes get snow. The climate is best from October-February, when it is sunny; but the heat is not searing. There is a lot of rain from May to October.

The historic and colourful capital of Manipur is Imphal, where can be found the ruins of the ancient Palace of Kangla, and the world's oldest surviving polo ground. Polo was invented in Manipur, were it is known as "Sagol-Kangjei", sagol for horse and kangjei for hockey stick. The game is traceable back as early 3100 BC, when it was first played by the Gods, then handed down to the people.

Manipur also has the only market in the world where only women tend stalls. The state's history is chronicled in the Manipur State Museum in Imphal.