Where to buy property in Hoan Kiem, Vietnam 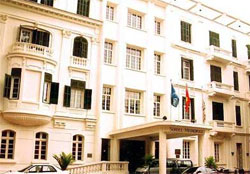 Hoan Kiem, (a prime area) which means “Lake of the Restored Sword”, is a historic district in Hanoi, taking its name from its lake.

In the Old Quarter, buildings and streets still maintain the same layout and architecture of old Hanoi, a city that originally consisted of 36 streets. Along each of the streets during the beginning of the 20th century were shops that specialized in a specific trade. All jewellers were on one street while all the silk traders lived on another. The current names of the streets still reflect the original trades. However, the curio, silk and artisan shops that make their home there now do not follow the original categorization of trades and are all mixed in together all over the area.

The Old Quarter is an excellent place to sample some fragrant local cuisine.

Dong Xuan Market is the largest and oldest market in the city. Built in 1889, the street market covers 600 square metres with stalls and vendors selling anything from food, to home appliances to souvenirs. Though the market is maintained mostly to attract tourists, there are still some good finds that can be found along its crowded aisles. It is a great place to try some local delicacies, from the familiar rice noodle and beef to items more unusual to the foreign palate, like uncooked duck blood.

Hoan Kiem District is the best place to catch one of Vietnam’s cultural highlights: a water puppetry show at Thang Long Water Puppets Theatre. The art and tradition of water puppetry dates back to the 11th century, when the rural Vietnamese believed that spirits controlled every aspect of their lives. Villagers created water puppetry to entertain not only themselves, but to satisfy spirits using available resources from their immediate environment, such as ponds and flooded rice paddies. While villages still entertain themselves this way, performers such as those with the Thang Long Water Puppets Theater, create their magic on special pool stages constructed for this purpose. The puppet troupe from Thang Long Water Puppets Theater is world renowned, having performed all over the world.

While many of the city’s French-style buildings are situated in Hanoi’s French Quarter, Hoan Kiem District has its own fine specimen: the Hanoi Opera House. Built by French colonists between 1901 and 1911, the opera house was modelled after the great opera house in Paris, the Palais Garnier.

The National Museum of Vietnamese History is a great place for a crash course in the country’s colourful past. Housed in a beautiful French colonial building that was completed in 1932, the museum has large displays from important periods in Vietnamese History. Even the building itself provides visitors with a great lesson in Vietnamese culture. The slanted roof, as well as the double walls and balconies created for natural ventilation and protection from the sun is a prime example of Indochinese architecture. This form of architecture is a beautiful marriage between traditional Vietnamese architecture and colonial French architecture.

Hoan Kiem is also a great place to experience the city’s vibrant nightlife.

Hoan Kiem Lake (“Lake of the Restored Sword”), the centre of Old Hanoi, awakes early morning to watch local residents do their Tai Chi routines and joggers circle the shore.

The lake is associated with a fascinating legend. It is told that in the mid-15th century, Emperor Ly Thai To was given a magical sword by the heavens. He used the sword during the war with the Chinese and eventually drove them out of Vietnam. Afterwards, a tortoise took the sword from the Emperor and disappeared into the deep lake, taking the weapon back to its rightful divine owner.

The area surrounding Hoan Kiem Lake has some of the best hotels in Hanoi. The most luxurious is the Sofitel Metropole, followed by the Hilton, Daewoo, and Sheraton. There are many high-rise towers around the city centre, as well as boutique hotels at the Old French Quarter north of the lake. There are also fully furnished serviced apartments and villas available.

Hanoi’s maze-like Old Quarter is the oldest area in the city. It has been an important economic centre for centuries. It is also known as 36 Old Streets, since its streets are organized according to specific trades.

The Old Quarter originated from workshop villages, each village specializing in a trade or craft. Each community of craftsmen and tradespeople later evolved into guilds and the streets were formed. Each street was lined with tall and narrow tube houses that accommodated generations of families as well as the family business. The guilds brought their religions with them and each street has at least one temple. They also built communal houses slightly hidden from view, with courtyards and a temple inside.

There are fascinating historic sites in the Old Quarter. The most notable and oldest temple in the city is the small Bach Ma Temple. It was built by Emperor Ly Thai To, and the pagoda features a horse statue in honour of the white horse that was said to have led the king to the site. The remains of the Citadel wall stand in some places.

French colonial buildings add charm and nostalgia to the Old Quarter. Some have been converted into shops, stores, and restaurants.

Van Kiep Lane is a peaceful area with not much traffic. There are nice and affordable apartments available for lease and for rent. It is near schools, restaurants, supermarkets, hospitals and the city centre.