Where to buy property in Hamburg, Germany 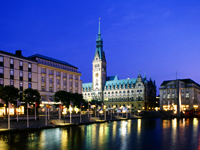 Germany's second largest city Hamburg, is often called the Venice of the North, because it borders two seas - the Baltic and the North Sea - and has numerous canals.

In this city-state there is a blend of elegant old houses, museums and palaces with vibrant and experimental modern architecture. The antiquated Baroque St. Michaelis Church stands out among steel-and-glass buildings in the modern part of the city.

This is a city that has a history of resilience, surviving for 1,200 years. A North Sea port, it suffered during World War II, but since then has been rebuilt into a glorious green city. Almost half of its area is covered by forest, fields, water, and open green spaces, including some 1,400 parks. In the middle of the city is the vast Alster Lake.

The harbour defines the city's identity. Hamburg's architecture is arguably the most interesting in Germany, primarily because large parts of Hamburg escaped Allied bombing, primarily (it is said) for the macabre reason that the British knew they would occupy Hamburg at the end of World War. So, they refrained from bombing the most beautiful mansions, located on the lake which runs straight down the middle of the city.

The result is that the city was spared from the types of bombings which destroyed places like Mainz and Dresden. The Jugendstil Villas, or the Art Nouveau mansions, circle the furthest end of the Aussenalster, or Outer Alster, one of two man made lakes created by the Alster River running into the Elbe. The mansions are reminiscent of sugar icing, created from calcium stone and marble, and are an integral part of the history of this beautiful city.

Hamburg has always had the country's most progressive and modern architecture. Perhaps influenced by its maritime culture, structures of steel, zinc and glass line the waterfront, side by side with the traditional klinker (red brick) buildings of the 19th century. The result is an eclectic mix of styles, which makes Hamburg one of the most interesting cities in Europe.

Another interesting fact about Hamburg: there are more bridges here than in Venice and Amsterdam combined - over 2,500 in total. From April to November, a fleet of ferries transports people across the canals, passing the villas and pretty neighbourhoods. This all gives the city a sense of elegance.

There are plenty of entertainment options in this city, with its 31 theatres, 6 music halls, and 10 cabarets. Hamburg also boasts 50 museums plus other significant cultural institutions, being the cultural hub of Northern Germany. It is also a favourite place for shopping. Other popular destinations here include the beach and the historic towns.

The true heart of commerce in Hamburg is within the Merchant's District, in the centre, dominated by imposing historic red-brick architecture, and many major companies. The Altstadt contains many of the city's most historic buildings, including the 9th-century Hammaburg, and Hamburg's major churches: St. Michealis, St. Katharien, St. Jacobi, St. Petri and the ruins of St. Nikolai. It is also where most of the cultural activities take place: the Kunsthalle, opera house and the two main theatres (the Thalia Theatre and the Deutsches Schauspielhaus) are here, as too are the stock exchange and the extravagant town hall.

But Hamburg has a seedy side too. Reeperbahn, one of the largest red light districts in Europe, is the pulsating heart of the city. The Beatles knew the area, in fact it gave them their start. Reeperbahn also houses theaters and night life galore. However, the ladies of the night do not like it when women walk in Herbertstarsse. They get beer thrown at them, unlike men.

Eppendorf is a beautiful neighbourhood with many stately apartment houses, lots of antique shops, and great cafes and restaurants. The streets are lined with elegant turn-of-the-century town houses, and numerous small rivers flow through the district. The longest outdoor market in Europe is here, over a kilometre long, takes place twice a week under the railway line.

This is a hip, colorful, multinational neighborhood near the central train station. Here you can find great deals, good Turkish and Indian food, and some new gentrified cafes, as well.

An upmarket district on the Outer Alster's western shore. Dominated by rows of late-19th century town houses and ornate, neo-classical mansions, this area is a favourite with young professionals. The area is extremely trendy, which has led to the district being christened 'Schn�seldorf' (little snot's town) by locals. Harvestuder Weg, home to many foreign consulates and company headquarters, is one of the city's most sought-after addresses, while Alsteruferweg is perfect for a relaxing stroll.

Colourful and hip, with a large Turkish population, these two neighbourhoods offer street culture, cultural festival and culinary delights. Mercado is main the shopping centre, and has a large international food court and market in the basement.

This once-seedy neighbourhood has now been "discovered". It has become a sort of a cult area in Hamburg for people-watching. Great sushi bars, ethnic shopping and a vibrant nightlife, make it a perfect place to visit any time of the day.

Directly on the water, the Fish Market takes place at 5.00am every Sunday. Because it is close to the Reeperbahn, people just party through the night and spill over to the fish market at dawn. Fresh fish is auctioned off in a wild frenzy. By 9 in the morning, it is all over.

The green iron-constructed market surrounds the central hall, from where it spreads out along the banks of the river. The shouting and banter of traders competes with the cacophony of a local band, creating quite a rowdy atmosphere. Punters are merrily stuffing their mouths with pickled fish dishes and beer whilst making their way around the myriad stalls. A must-try of the fish delights on offer is smoked eel. Probably the ugliest thing you've ever seen, but the taste is a wonderfuly delicate smoky flavour.

Port City is still under construction. When finished, it will be Europe's biggest inner-city quarter built on water. Over the next 15 years, the 157 hectare Hafen City site will be transformed into an exciting metropolitan area combining residential with commercial and leisure.