Where to buy property in East Kalimantan, Indonesia 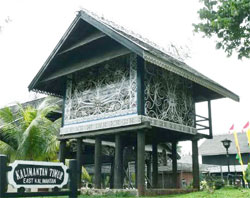 East Kalimantan is the second largest province and the most industrially advanced on Kalimantan. About 17 million hectares of land are covered in lush dense forests. This is where orchid varieties such as the black orchid are found growing in the sanctuary of nature reserves. East Kalimantan also boasts as being the home of Kutai, the oldest Hindu kingdom in Indonesia.

The Kutainese and the Banjarese mostly live in towns and cities occupying the coast. The Dayak on the other hand live mostly in the hinterland, in beautiful long houses called umaq daru. The traditional long houses are slowly disappearing however, as they are being converted into stages for fine arts performances or meeting halls. The Dayaks are also known for a wonderful textile called doyo.

East Kalimantan has some great tourist attractions, many of them natural. There is the Kayan Mentarang National park, a crocodile breeding farm in Balikpapan, deer breeding grounds in Penjam and the beaches of Batu Lamampu in Nunukan and Amal in Tarakan.

The seaport city of Balikpapan lies in the province of East Kalimantan. The city has many hills and few flatlands.

The small and clean city was once a Bugis fishing village, and now serves as the only oil refinery site in the province having two sub-units, and the centre of petroleum production. It is a major headquarters of multinational corporations and international oil companies.

Balikpapan, which is safe and quiet, is home to a large number of expatriates from Australia, France, and the US, and a mix of Indonesians from all over the country. As water and electricity can be a major problem in the city, most expatriates prefer to live in company or independent compounds. Compounds have beautiful housing but rents are quite expensive. More affordable housings can be found outside the compounds.

The exclusive Vilabeta Residence consists of houses, apartments, and facilities such as a restaurant, tennis court, fitness centre, bowling, a mini soccer field, and a kids’ play ground. It is near a golf course and the shopping centres.

Other complexes that cater to expats and Indonesians are the Balikpapan Baru, Bukit Damai, and Wika Complex. These are safe and offer reasonably priced housing. On the beach, there is the popular Balikpapan Housing Complex and Palm Court, which offers some new houses.

The capital of East Kalamintan and the most populated city in the province is Samarinda. The city runs parallel the mighty Mahakam River, which gets busy with timber and coal transports. Samarinda, which is an important trading port, takes care of the province’s wood industry. But unlike the highly industrialized Balikpapan oil city, Samarinda retains its Indonesian character. It has fewer expat residents than the more affluent Balikpapan.

Houseboats and fishing boats adorn the banks of Mahakam, lending a pretty sight to the area. Two mosques adorn the waterfront, one of which is the old Mesjid Raya Darussalam.

Samarinda is known for its beautiful sarong, a traditional East Kalimantan wraparound. Samarinda Seberang is the centre of this craft.

A Dayak village can be found in Samarinda, whose residents still hold traditional singing and dancing ceremonies.

Bontang city lies in the province of East Kalimantan. The city has many hills and swamps, and a mangrove forest. Bontang, which lies on the equator, enjoys a tropical climate, experiences frequent flooding, but no tectonic activity.

A large liquefied natural gas plant, Pupuk Kaltim, is located in Bontang. It is the largest producer and exporter of urea in the world.