Where to buy property in Carlow, Ireland 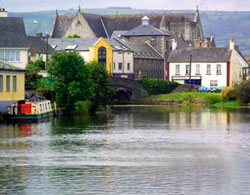 A scenic area between the Blackstairs Mountains and the Killeshin Hills, County Carlow is known as the “Celtic Centre of Ireland” for having the largest concentration of ancient Celtic monuments and sites. In the south flow the Rivers Barrow and Slaney.

There are many old monasteries and castles in this county, and pre-Christian monuments like Brown’s Hill Dolmen. There are also some fine churches; especially lovely is the Myshall Memorial Church, modeled on the Salisbury Cathedral. Carlow’s temple-like 19th century courthouse is one of the most beautiful in Ireland, and conceals a labyrinth of dungeons. At Killeshin there is a carved stone doorway that is one of the few surviving examples of Irish Romanesque architecture.