Where to buy property in Buleleng, Indonesia 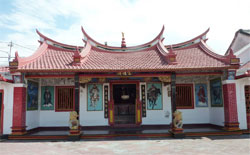 The hilly regency of Buleleng (a prime area) is a narrow area that runs the length of the island. Originally a powerful kingdom in the 17th century, it played important roles throughout the years. Afterwards, it became the Dutch force’s foot-in-the-door during its subjugation of Bali, even though it failed in doing so twice before.

Buleleng at one point was a major seaport, connecting the Spice Island to the traders coming in to exchange arms and opium for rice, cattle, fruits and slaves.

Beautiful jungle stretch of volcanoes, black sands and coconut palms give Buleleng a natural boundary between it and the rest of Bali. This fortress allowed Buleleng to naturally grow a culture that differs slightly from the rest of the island. Buleleng’s traditional performers, such as their musicians, dancers and singers are very well known in Bali, as well as the composers of traditional gamelan music.

Mountains and the sea not only give Buleleng majestic natural beauty but affect the climate as the air here is much drier. Because of this, wet rice cultivation is not popular, but fruit, coffee and cloves thrive.

Buleleng is a must see for those looking for a quiet, clean retreat amidst a scenic and culturally distinctive atmosphere, more Islamic than Hindu. The city of Singaraja in particular is a great place to start. It is a historical treasure trove, being the centre throughout many decades such as the time of the royals in the 17th century, Dutch colonization and finally as the modern district capital. It is still a bustling city but definitely not as developed as Denpasar, which also means it is not as polluted or as noisy.

Of particular interest is the area surrounding the Old Harbor. There are a few ancient buildings that line the street, dating back to the Dutch colonization. There is a Chinese Temple here; one of the few in Bali and proof of China’s long-time trading presence on the island. As it is not a developed tourist spot, visitors aren’t allowed to enter the main temple, but may wander around the compound and view the exquisite old pots and beautiful tapestries.

Other signs of the long time Chinese presence in the city are the old Chinese cemetery beside Bukit Suci (“sacred hill”) and the sea. Bordered off by a long railing, lions and life-sized, lance-armed black guards in white turbans guard the gates. Gaze at the unusual graves as you walk through it towards Pantai Lingga, a favorite beach spot of the locals.

Another place that draws attention in Singaraja is the Pertenunan Berdikari Hand Woven Cloth Factory. It is a manufacturing plant open to tourists who want to watch cloth being woven and spools of thread being spun. The manufacturer specializes in intricate replicas of ancient Buleleng textiles in silk. Another textile mill in the area is Perusahaan Puri Sinar Nadiputra, known for their woven sarongs.

Pasar Buleleng is an animated night market that makes for good night time exploring, and is popular to tourists and locals alike. The people here are noisy, friendly and open.

Near Singaraja is the village of Bratan. It is an artisan village well known for their silverwork, mostly of religious items. One can watch the craftsmen at work in their shops here.

Bali’s most beautiful and tallest waterfall is found in Gitgit. At the waterfall, the misty air is cool and a great atmosphere for a picnic lunch after a swim in the cold river below.

Banjar Tegeha is a small village. It contains the Brahma Arama Wihara, the only Buddhist complex of its kind in Bali. It incorporates Buddhist architectural elements not popular in a place largely Hindu and Islamic. Sitting quietly and coolly atop hills, it commands a great view of the ocean. Playing central roles in Buddhist life and education, people from around the world assemble here to practice meditation. Banjar is where Air Panas is. It is a sacred sulphurous hot spring channelled into three pools.

Further west is Banyupoh village where Pantai Gondol is. Pantai Gondol is a lovely clean sand beach with an exquisite coral reef. It is most popular for sunning, swimming and snorkeling.

Pura Pulaki is the most accessible of a cluster of temples in Buleleng. Home of some naughty monkeys, Pura Pulaki is a large temple found in-between rocky walls and the glimmering ocean. The temple is the origin of some local folklore, of the gamang or Wong Samar, invisible occupants that have attained an immaterial state prior to the arrival of a Javanese priest who migrated to the area in the 16th century.

Rounding up the western end of Buleleng is Taman Nasional Bali Barat. This national park is the sanctuary of birds, animals and plants indigenous to the region.

The eastern end of Buleleng has some great sites, such as the Makam Jayaprana temple that marks the gravesite of the murdered Jayaprana and his faithful suicidal bride – the Balinese Romeo and Juliet.

Eastern Buleleng’s temple architecture is said to be “baroque” because of the heavily chiselled stonework, every inch intricately worked on. Great examples are found in the subak temple of Pura Beji, in the village of Sangsit. Another impressive temple is Pura Meduwe Karang temple in the old village of Kubutambahan.

Air Sanih beach resort is in eastern Buleleng. Its main attraction is its ice cold swimming pool found near the beach, with waters originating from a nearby spring.

An idyllic beach spot that sits on the black sand coast is Yeh Saneh. Guests can swim in the beach side or in the cool freshwater pool.

There are several places in Eastern Buleleng that contribute to the region’s rich culture. One is Banjar Pande, home of great silversmiths and another is Sawan, home of well-known gamelan makers and ironsmiths.

The second largest city in Bali is Northern Bali’s Singaraja, which means “Lion King”. The city, which has large boulevards, boasts a rich history and has many colonial houses and notable monuments. The old harbour has traditional shop houses found along its narrow streets.

Singaraja is a melting pot of religions as well – Buddhists, Muslims, and Hindus. One of its well-known attractions is the Gedong Kirtya, which houses the only lontar manuscript library in the world. The city is also known for its ikat cloth, manufactured in Puri Sinar Nadi Putri just behind Gedong Kirtya.

The ancient harbour of Buleleng is located at Singaraja. The port was once the busiest and the most important in Bali.

The most popular black sand beach resort in Buleleng is Lovina Beach, situated in Kalibukbuk village. The name Lovina was bequeathed upon the area by the last king of Buleleng to signify the “love” that holds fast “in” the heart of all people.

Beach, hotels and restaurants line Lovina Beach’s seven-kilometre coastline. It is a great area for snorkelling and swimming due to the calmness of the waters and the nearby reef at Menjangan Island which can be reached by local boats for hire. There are some great dive spots in further Labuan Lalang. As with many Balinese beaches, sunrise and sunsets on Lovina are lovely.

Other popular leisure activities at Lovina Beach are fishing, dolphin viewing and massages from the local ladies who sit on the beach offering their services.