Where to buy property in Buenos Aires Province, Argentina

The province of Buenos Aires—not to be confused with the autonomous city with the same name—has the largest economy in Argentina. A predominantly agricultural region, Buenos Aires is the country’s top producer of beef, sheep, pork, chicken meat, and dairy products. Soybean, maize, wheat, sunflowers, and oilseed crops are also among the province’s key products. The southern part of Buenos Aires is a wine-producing region.

The tourism industry is huge here; the province’s estancias, or farming estates, proving popular with visitors. Tourists also come to visit the many towns along the Atlantic coast (Mar del Plata, Pinamar, Villa Gesell, Miramar, and Necochea are the most popular). Other notable places in Buenos Aires are Tandil (a small town set in the middle of one of the world’s oldest mountain ranges), the Reserva Natural Sierra del Tigre and the islands of the Rio de la Plata delta, Isla Martin Garcia, the Chascomus Lagoon, and La Plata City. 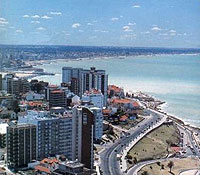 The capital city of the Buenos Aires Province, La Plata is highly urbanized and symmetrical, its layout a perfect square, with its main thoroughfares cutting diagonally across the city. Greenery is abundant in La Plata, with its tree-shaded boulevards and the beautiful and verdant Paseo del Bosque. It has an artificial lake, a zoo, a natural science museum and an astronomical observatory.

Located in the Almirante Brown district of Buenos Aires, Adrogué is a small, peaceful city of around 30,000 inhabitants. It is primarily known as a safe residential area, with quaint cobblestone streets under the canopy of lush trees. Although the city also has an important commercial centre (with many banks, boutiques, and a shopping mall), its generally quiet atmosphere is a lot more relaxed than downtown.

A favourite destination among tourists, Mar del Plata on the Atlantic coast runs high on the energy of tourists on vacation. Its many world-class hotels, restaurants, casinos, theatres and other tourist attractions draw visitors by the millions each year. The city is a main player in Argentina’s recreational industry, and aside from being a beach party city, it is also known as an important sports centre—it has an Olympic-style stadium that was used for the 1978 World Cup, 5 golf courses, and numerous other sports facilities.

Unlike its seaside sister, the busy Mar del Plata, the smaller city of Pinamar is primarily a residential area where the affluent denizens of Buenos Aires have chosen to build their splendid summer homes. The city was converted from wild sand dunes into a virtual seaside forest of pine trees, which makes it stand out from the other communities lining the Atlantic coast. Since it is mostly comprised of private summer retreats, the city is generally quiet throughout the rest of the year.

This picturesque locale has been the summer playground of the Buenos Aires elite for decades. As a testament to the wealth of its usual inhabitants, the city’s main street, Avenida Bunge, is lined with high-end boutiques and small shopping malls. The most exclusive area in this city of expensive high-rise buildings and chalet-style constructions lies north of the city centre, where there is an enclave of summer homes in a pine forest.