Where to buy property in Bucharest Ilfov Region, Romania 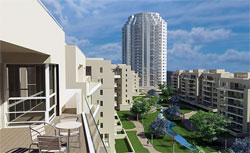 The Bucharest-Ilfov Region consists of Romania’s capital, Bucharest, and the county of Ilfov. Located in the Romanian central plain, this region is home to 87% of the country’s population. Compared to the countryside, many people speak English; and quite a number can manage German and French.

One of the largest property markets in southeastern Europe, Romania’s central urban region is the hub of the country’s economic and commercial activity. A variety of industrial sectors including construction, communications, research and IT have considerable presences here, with local and international companies employing a sizeable percentage of the workforce. Various top schools and universities are scattered throughout the region. The city has a dependable transportation system that makes going to school or getting to work very easy.

Despite its urbanization, the Bucharest-Ilfov region manages to preserve the bucolic allure of its countryside and its valleys, formed by rivers such as the Dâmbovita and lakes such as the Tei and the Colentina.

Sombre, utilitarian structures from Romania’s Communist past still stand, though many have been converted to trendy commercial areas. Since the early 1990s, after the fall of Communism and the country’s being included in the European Union, Romania has made great efforts to restore its historical landmarks. Exquisite Orthodox churches, fashionable parks, and even the grand Royal Palace in Bucharest City have been preserved to their former glories, providing a glimpse to the country’s regal past.

Such eclectic architectural styles reflect Romania’s determination to hold strong to its rich history and traditions even as it continuous to modernize.

Search for properties in Romania