Where to buy property in Ba Dinh, Vietnam 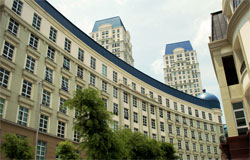 Ba Dinh (a prime area) is Hanoi’s French Quarter and the political heart of the city. It has centuries-old temples and 19th century colonial buildings. Wide, spreading trees that line its resplendent old boulevards provide shade from the hot Vietnamese sun.

Ba Dinh Square is where Vietnam’s first president, Ho Chi Minh, read the Declaration of Independence in 1945, establishing the Democratic Republic of Vietnam. His mausoleum now stands on the site. He had requested to be cremated like many of the Communist leaders that preceded him, but the memorial was built regardless. His body now lies in a glass case, preserved in the cool central hall of the crypt, flanked by military honour guards. The memorial was inspired by the mausoleum of Vladimir Lenin in Moscow, but elements like its sloping roof give the gray granite structure a more distinct Vietnamese feel.

The historic One Pillar Pagoda (Chùa Một Cột) can also be found here. It was erected by the 11th century Emperor Lý Thái Tông to celebrate the birth of a long-awaited son. The emperor had dreamt that the Goddess of Mercy handed him a son on a lotus flower. In gratitude, he had the wooden pagoda built to resemble the lotus blossom in his dream.

The well-preserved Presidential Palace is one of many lovely old buildings from the French occupation in Ba Dinh. It was once the home of the Indochina Governor-General. Other examples of French architecture here are the Opera House, which was built with the Paris’ neo-Baroque Opera house in mind, and Hanoi’s Museum of History, an example of the Neo-Vietnamese architectural style.

Ba Dinh has a number of government offices and embassies. Government workers commute into the district everyday, while expatriates and high-ranking officials live in nearby residential areas. 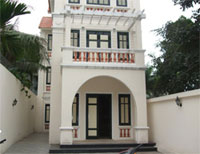 West Lake is the largest lake in Hanoi City. The area had a reputation for being a favourite royal recreation and spiritual retreat. Palaces and temples were built here, including Hanoi’s oldest pagoda, the ancient Tran Quoc.

The area exudes the same elegant air today, as it continues to be an enclave of the wealthy, particularly the expatriate community. Contemporary style three-storey villas and high rise hotels now line the lakeside. There are also posh clubs, seafood restaurants, and shops. The luxury hotels in the area include Thang Loi Hotel and the five-star Meritus West Lake Hotel. 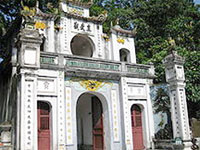 The historic, 11th century Quan Thanh Temple was built during King Ly Thai To’s reign, in honour of the god of the north of the country, Huyen Thein Tran Vo. The temple’s latest renovation added the shrine, the worshipping halls, the yard, and the triple gate to the complex.

Many expatriates live in Quan Thanh Ward. It is a prosperous spot with many lovely houses and hotels.