Where to buy property in Hungary 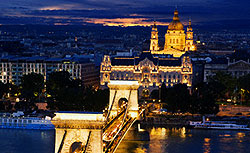 Many who visit Hungary never venture outside Budapest, an alluring cosmopolitan set city against a background of romantically eclectic buildings, lofty boat sails on the Danube, and the energetic pulse of a throbbing nightlife.

The city is steeped in a wealth of Art Nouveau, Eclectic, Neoclassical and Baroque.� Before the 20th century came Budapest's "golden age" when large numbers of Art Nouveau buildings were constructed in areas such as along Nagyk�r�t (Big Ring Road), through Andr�ssy �t, and finally up to V�rosliget (City Park) are confirmations to Budapest's moniker as "the Paris of Central Europe".� And there is the Great Synagogue, the largest in Europe; and the Sz�chenyi Medicinal baths, again, the largest medicinal bath in Europe. �Then, much of this was damaged in World War 11, and allowed to decay under the Communists.

While Budapest has recently been renovated at lightening speed, history speaks to you from crumbling buildings which are reminders of two World Wars, museums and parks filled with memorabilia of eras long gone.�

Hungary's rich history has made it one of Europe's most popular tourist destinations. Esztergom Basilica, Pannonhalma Archabbey, the second largest abbey in the world; G�d�ll', an extraordinary baroque palace; the largest Early Christian Necropolis, at P�cs, a collection of underground tombs with remarkable Christian-themed murals - the itemization of "largests" which Hungary hosts could continue a long time.

Hungary is famous for its spa culture. With a history of nearly 2000 years, Hungarian baths are an incorporation of Turkish, Greek and Roman architectural elements. Today, there are approximately 450 public baths operating in Hungary, and Budapest uses almost two million bath tubs of thermal water per day. These are a unique Hungarian experience. �Lake H�v�z is the largest thermal lake in the world with temperatures always between 23 - 36 C, no matter how freezing the winter or blazing the summer.

Landlocked Hungary's landscape is made up mostly of flat or rolling plains, split in two by the Danube, its main waterway.� Hortob�gy is the largest natural grassland in Europe. �Summers in Hungary are hot, with frequent showers, but low humidity levels. Winters are bitter and snowy.

Under the Romans, the area of Hungary was known as Pannonia.� In 896, the Magyar tribe settled here. Under the rule of the chieftain �rp�d, the Magyar tribes were unified and carried out raids as far as Spain and southern Italy, using light horsemen with mastery of the reflex bow.�

�rp�d adopted Christianity and Pope Sylvester II sent a crown to Hungary (still extant), and on December 1,000 AD Stephen I of Hungary was crowned King in Esztergom. �Hungary was Christianized, adopted the Latin alphabet, and became a feudal state.

In 1241-1242, the country suffered a Mongol invasion, in which up to half of Hungary's population of two million was killed. King B�la IV ordered the construction of hundreds of stone castles and fortifications, a strategy which stopped a second Mongol invasion.

Hungary then went through several dynasties, incuding the Angevin, and the House of Luxembourg. A recurring theme was the weakening of royal power, and the strengthening of Parliament and the nobility.

In 1458 the noble Matthias Corvinus was elected King. A true renaissance prince and an outstanding administrator and scholar, he aggressively expanded Hungary, pushed back the Ottomans and conquered large parts of the Holy Roman Empire. His library, the Bibliotheca Corviniana, was 15th century Europe's largest (outside the Vatican), and is now a UNESCO World Heritage Site.

Corvinus however died without a successor. Increasingly the power of the nobles, and political disorder, allowed the Ottomans to advance, and they gained a decisive victory over the Hungarian army at the Battle of Moh�cs in 1526.� Chaos followed, with two rival monarchies, and the country remained divided until the end of the 17th century. �

A large part of the area was devastated. Most smaller towns disappeared.

In 1686, the Austrian-led Holy League's army of over 74,000 men reconquered Buda. By 1711 the anti-Hapsburg forces had been defeated, many of the castles of the nobility had been blown up, and in 1718 all Hungary was removed from Ottoman rule.� There followed a quiet century under the Hapsubrgs.

To appease Hungarian separatism, Franz-Joseph in 1867 created the Austro-Hungarian Dual Monarchy. The two realms were governed separately, by two parliaments, but with a common monarch and common external and military policies.

By now, the Hungarian economy had become relatively industrialized. In 1873, the old capitals of Buda and �buda (Ancient Buda) were merged with Pest, creating the metropolis of Budapest. �Pest became the country's administrative, political, economic, trade and cultural hub. Technological change accelerated industrialization and urbanization, and GNP per capita grew roughly 1.45% per year from 1870 to 1913, which compared favourably to growth in other European nations such as Britain (1.00%), France (1.06%), and Germany (1.51%).

The 1st World War and after

Hungary was a key participant in World War I.� After its defeat, the Communist Party, led by B�la Kun, proclaimed a Hungarian Soviet Republic and led a Red Terror. However soon the counter-revolutionaries - the "Whites" - assumed power, led by Istv�n Bethlen, a Transylvanian aristocrat, and Mikl�s Horthy, the former commander in chief of the Austro-Hungarian Navy. Many Communists and other leftists were executed without trial. Radical Whites launched pogroms against the Jews, who then constituted around 6% of Hungary's population. The Romanian army pillaged the country: livestock, machinery and agricultural products were carried to Romania in hundreds of freight cars.

In 1920, Hungary signed the Treaty of Trianon, and lost two-thirds of its territory, as well as 3.3 million ethnic Hungarians, prompting a nationalist reaction. The Great Depression shifted politics further to the right. The First Jewish Law was passed in 1938, to limit Jewish involvement in the Hungarian economy. �In 1941 Hungary entered the war on the side of the Axis. In October 1944, Horthy tried to disengage Hungary from the war, but the Germans replaced him and occupied Hungary (May-June 1944), deporting nearly 440,000 Jews, mostly to Auschwitz.

Following the fall of Nazi Germany, Soviet troops occupied the country and Hungary became a satellite state of the Soviet Union. After 1948, Communist leader M�ty�s R�kosi established collectivization and a planned economy. Hungary experienced one of the harshest dictatorships in Europe.

When Joseph Stalin died in 1953, the unpopular R�kosi was replaced as prime minister by Imre Nagy. Nagy removed state control of the media and talked about holding free elections and withdrawing Hungary from the Warsaw Pact. The Soviets invaded in 1956 and appointed J�nos K�d�r. �

During Kadar's term, Hungary was often satirically referred to as "the happiest barrack" within the Eastern bloc, with a relatively high standard of living, and less travel restrictions than other Eastern Bloc countries.

In 1989, Hungary's communist party convened for the last time, and re-established itself as the Hungarian Socialist Party. The former People's Republic became the Republic of Hungary. �

In 1990 the centre-right Hungarian Democratic Forum (MDF), which advocated a gradual transition towards capitalism, won the election. The liberal Alliance of Free Democrats (SZDSZ) came second, and the Socialist Party trailed behind.� In 1991 most state subsidies were removed, leading to a severe recession exacerbated by the fiscal austerity necessary to reduce inflation and stimulate investment.

In the May 1994 elections the Hungarian Socialist Party led by former Communists won an absolute majority in parliament.�

In May 1998 parliamentary elections, the Fidesz-Hungarian Civic Party defeated the Hungarian Socialist Party. Fidesz leader Viktor Orb�n took over as prime minister in July and formed a center-right coalition government with the Independent Smallholders- Party and the Hungarian Democratic Forum.

In April 2002 parliamentary elections, the Hungarian Socialist Party and its ally, the Alliance of Free Democrats, narrowly defeated Orb�n's coalition. P�ter Medgyessy, an official in the former Communist government, was sworn in as prime minister. �

Medgyessy lost the confidence of the Free Democrats in 2004, after weeks of disagreement over how to reduce Hungary's large budget deficit, as required to adopt the euro by 2010.

Yet after the Socialists replaced Medgyessy with Ferenc Gyurcs�ny, the Socialists and Free Democrats solidified their hold on parliament by a margin of 210-176 in the April 2006 general elections, the first government reelected since the fall of Communism in 1989.

However, as Hungary faced its worst economic crisis in 20 years, it was disclosed that Gyurcs�ny had deliberately concealed the depth of the crisis to win the 2006 elections, and riots ensued.

In March 2009 Gyurcs�ny announced that he would step down, since he was widely seen as an impediment to resolving the country's economic problems. Gyurcs�ny named Gordon Bajnai, the economy minister, as his successor, and Bajnai took office in April 2009.

Find properties for sale in Hungary