Where to buy property in France

France has everything - Parisian grandeur and culture, quaint villages, beautiful scenery, mountains for climbing and skiing, wonderful food and wine, and top-class education. It is also a major economic power.

The French are known for their pride in excellence, whether in traditional products or hip contemporary creations. The cost of living tends is high in a country that places such a premium on quality, even in imports, but fortunately even the simpler and cheaper products tend to be good.

The French are sometimes seen as rude, especially by their British neighbours (the sentiment is mutual). But speaking even a little French will go far. The French are mostly a quiet and private people, much more reserved than their Italian neighbors. As in the world over, people tend to less warm in large cities like Paris than in small towns and provincial areas. English has now been taught in schools for some time now, so even non-French speakers will find it possible to communicate with younger people.

What people usually refer to as France is actually Metropolitan France, consisting of the 22 regions in Western Europe, but not the French territories in other parts of the world. The 22 regions are subdivided into 100 departments. 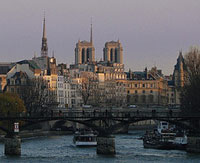 France's history stretches back to ancient Gaul, which was absorbed into the Roman Empire by Caesar in the 1st century AD. In the 4th century Gaul was overrun by Germanic tribes, principally the Franks, hence the modern name France. Under Charlemagne, the empire was divided into 3 portions, East Francia, Middle Francia and Western Francia - the last the precursor of modern France. Descendants of the Carolingian dynasty's successors, the Capetians, ruled France till the French revolution, engaging in a series of wars to expand their territory.

The French monarchy reached its height during the 17th century and the reign of Louis XIV (who built Versailles, and who reigned from 1643-1715). France then had Europe's largest population and its most prosperous economy, was the continent's cultural leader. One of the key successes of Louis XIV's reign was to solidify central control of the kingdom, reducing the powers of the feudal nobility, though many of their privileges survived.

In the 18th century, the Enlightenment was primarily French-led, representing a radical move away from a religious world-view. It was the intellectual counterpart of France's position as Europe's most advanced country. Major scientific breakthroughs were achieved by French scientists.

The monarchy ruled France until the French Revolution, in 1789, when Louis XVI and his wife, Marie Antoinette, were executed (in 1793), along with thousands of other French citizens. Ironically, the revolution was partly a reflection of the monarchy's success and France's leading position as a developed nation, and of the climate of optimism, exploration, and rejection of the "old order" (Ancient Regime) - which the Monarchy had gone some way to reform. Parliament seized power from the monarch and this soon became mass rule, which became rule by demagogues who played on the Paris mob. The nation descended swiftly and utterly unexpectedly into an extraordinary spiral of terror, which culminated in the sanguinary rule a single, determined, and wholly uncompromising 'democrat', Maximilien Robespierre.

The realization that no-one was safe from Robespierre's wandering and lethally suspicious mind finally prompted a coup, and the seizure of power by a triumvirate known as the Directory. However the power vacancy at the top allowed a successful general, Napoleon Bonaparte, to seize control of the Republic in 1799, making himself First Consul, and later Emperor of what is now known as the First Empire (1804-1814). In the course of several wars, his armies conquered most of continental Europe, with members of the Bonaparte family being appointed as monarchs of newly established kingdoms. 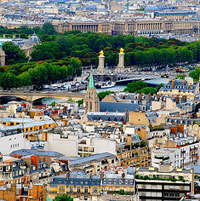 Following Napoleon's final defeat in 1815 at the Battle of Waterloo, the Bourbon monarchy was re-established, but with new constitutional limitations. But because Louis XVIII and particularly his brother Charles X gave too much power to the extreme monarchists (the 'ultras'), in 1830 a civil uprising overthrew the Bourbons and established the July Monarchy, which lasted until 1848. Louis-Philippe d'Orléans, a member of the Orléans branch of the royal family, and son of Philippe égalité who had voted the death of his cousin Louis XVI, took power saying: "We will attempt to remain in a juste milieu (the perfect mean), in an equal distance from the excesses of popular power and the abuses of royal power. The July Monarchy had a distinctly middle-class, upper-bourgeois texture. However Louis-Philippe moved increasingly away from liberalism, and his self-preserving authoritarianism undercut his legitimacy, and led to his overthrow.

In the election for the 2nd Republic, Louis-Napoléon, the son of Bonaparte's brother Louis Bonaparte, won a surprising landslide victory, with 75% of the total votes, and became President. But the political environment degenerated into a confrontation between extremism of the 1st Republic and the Monarchists, and in 1952 Louis-Napoléon proclaimed the Second Empire (as Napoleon III). He was only unseated following defeat in the Franco-Prussian war of 1870, when his regime was replaced by the Third Republic, which lasted until the invasion of France by the Germans in 1940.

The Third Republic was France's longest-lasting constitutional form since the French Revolution. Despite its increasingly democratic and socialist spirit, France continued to expand its colonial possessions, and the 19th and 20th centuries, its global overseas colonial empire was the second largest in the world behind the British Empire.

France was victorious nation in World War I, but the human costs were enormous. The interwar phase was marked by a variety of social reforms introduced by the Popular Front government. In 1940, following the German blitzkrieg campaign, France was divided into an occupation zone in the north, and Vichy France, a puppet regime loyal to Germany in the south, under General Petain, who actively assisted the German occupation in the persecution of the Jews.

The Fourth Republic was established after World War II. It oversaw a period of spectacular economic growth (les Trente Glorieuses). However, the republican government's paradoxical determination to hold on to its colonial empire left to a war over French Indochina, which ended in French defeat at the Battle of Dien Bien Phu in 1954. 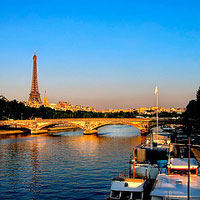 Months later, France faced a new, even harsher conflict in Algeria. The struggle for control of Algeria, then home to over one million European settlers, nearly led to civil war. In 1958, in a semi-coup, the Fourth Republic gave way to the Fifth Republic, which contained a strengthened Presidency, reflecting the beliefs of Charles de Gaulle, its first President.

The V Republic has largely been a success, and in cooperation with Germany, France has been the core of the evolution of the enormously successful European Union, including the introduction of the euro in January 1999. The French electorate voted against ratification of the European Constitutional Treaty in May 2005, but the successor Treaty of Lisbon was ratified by Parliament in February 2008.

Find properties for sale in France