Where to buy property in 10th Arrondissement, France 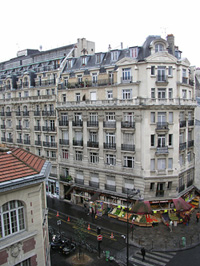 This arrondissement on the right bank of the Seine is where two of Paris's six main railway stations are found. The Gare du Nord and the Gare de l'Est are among Europe’s busiest train stations.

Apart from the stations, which have working class surroundings, there are also calmer districts, especially to the south. An up and coming district is the Canal St-Martin, where barges float. Its banks are a favorite place for strolling, biking, and inline skating. Restaurants and cafés are found along the banks, taking advantage of the relaxing view. The Canal St Martin area is becoming quite sought-after, making it one of the more expensive parts of the 10th. It is the only area to offer any real sense of community.

The historic Place de la République in the far south of the arrondissement offers many bars, restaurants and cafés, and offers a variery of apartments. For nightlife, though, it’s better to go to the neighboring 11th arrondissement.

The north of the 10th is somewhat messy, and has less expensive properties in a mix of traditional and modern architecture.

The west offers a bustling city life. The apartments tend to be late Haussmann, and slightly run down.