The rich and famous get burned by the property bust

Celebrities have also felt the forbidding pinch of the financial crisis gripping middle-income homeowners as some are actually selling their property at a loss if not completely losing them as foreclosed assets.

According to reports some of the rich and famous blamed financial mismanagement or  poor judgment of investments that made them lose millions of dollars of their earnings.

Celebrities Selling at a Loss: 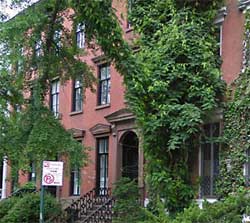 Robert de Niro. The actor, best-known for his roles in films “Raging Bull” and “Taxi Driver” has been known for his extensive property investments in New York. He is now selling his 19th century townhouse at 14 Saint Luke's Place, which according to documents was purchased back in 1975.

Priced earlier this year at $14 million, the property is now auctioned  for $11.995 million, a report from the NY Daily News revealed.

Mr De Niro’s five-storey, 22-foot-wide property, which was home to poet Marianne Moore during the 1920s, is on one of the West Village's most storied and coveted blocks, between Hudson Street and 7th Avenue.

Sharon Stone. Another Hollywood A-lister, brought to fame by her role as the sultry psycho killer in “Basic Instinct” has also moved to sell her L.A. property for $8.995 million, although she purchased the property in 2006 for $10.995 million, according to World Property Channel.

Sylvester Stallone. The actor known for his roles in “Rambo” and “Rocky” had also parted from his 1.75-acre property in Thousand Oaks, California, which is a vintage lakefront home retreat that has a boathouse, guest quarters, and caretakers’ quarters as amenities.

Mr. Cage, according to Forbes.com, was forced to sell four properties in order to pay tens of millions owed in government taxes.

Julius “Dr.J” Erving. The famed basketball player of the NBA lost his property in St. George, Utah after failing to sell it for $2.25 million in 2009.  He moved to Atlanta and in 2010 creditors begun the foreclosure process. Last autumn, he defaulted on his payments on his loans forcing the bank to confiscate the property.