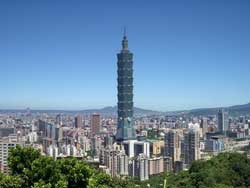 The monthly report flashed a “yellow-blue” signal for home sales, indicating that the market is at risk of recession in the coming months.

The total score for the housing market index stood at 40 last month, down one point from September, while the number of prospective buyers declined 20 percent, the report showed.

A reading between 33 and 42 suggests a downturn, while a smaller score indicates recession, it said.

A total of 62 percent of new pre-sale projects are concentrated in New Taipei City, Taoyuan County and northern Hsinchu, where housing prices are more affordable, the report said.

Prices for pre-sale housing showed little change at NT$720,000 (US$23,980) per ping (3.3m2) in Taipei and NT$340,000 per ping in New Taipei City last month, the report said, adding that some projects in Taipei were higher priced than in September.

The room for price concession narrowed from September, at 12.6 percent, to 12 percent last month because of a sharp decline in supply, the report said.

H&B Realty Co., the nation’s largest real--estate broker by number of franchises, said that housing prices remained virtually unchanged at NT$514,000 per ping in the capital last month, compared with NT$518,000 per ping the previous month, while it took an average of 70 days to close a deal last month in Taipei City, from an average of 53 days in September.