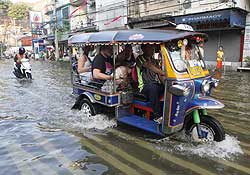 For Bangkok condominium developers, every sky has a silver lining. While the condominium market has been severely curtailed in Q3 following widespread floods and the ongoing doubts regarding the government’s policy regards to incentives for first home buyers, experts foresee a strong comeback once the floods have receded and the government’s policies are properly in place.

“We are seeing an increase in the number of high rise permits being lodged as developers prepare for increased demand,” said Tony Picon, associate director of Research at Colliers International Thailand adding that the market could experience a significant comeback in terms of new condominium launches in the first quarter of next year as a result of a backlog.

A wait-and-see attitude has been adopted and according to Picon, “Buyers are waiting to see the full picture emerge before steeping in and developers are taking note and delaying launches.”

Widespread floods have affected the outskirts of Bangkok and surrounding provinces for weeks and combined with uncertainty regarding government tax policies, the investment sentiment has cooled in Bangkok.

“What we are seeing is similar to the second quarter of last year where people were putting off buying due the red shirt protests,” said Picon adding that the strong comeback seen in the two quarters following the protests, where launches reached more than 20,000 units in both quarters, is likely to repeat itself in the coming quarters.

He said the floods may deter people from buying landed property and instead consider condominiums as they are less flood prone and also provide better protection for vehicles. “This is what happened in Myanmar after cyclone Nargis hit. People moved from landed houses to condominiums which had a positive effect on the condominium market,” he said.

The recent government tax proposal for first home buyers may also have had an effect on new launches, according to the latest Colliers research on the Q3 condominium market.

The tax policy involves a tax incentive for first home buyers of homes priced up to THB5 million (US$162,048). The scheme allows for a tax credit worth 10 per cent of the home price against the buyer’s personal income tax, to be equally distributed over five consecutive years.

The scheme is under criticism for only including new condominiums and mainly benefitting the middle and upper income earners as they would receive the larger tax credits due to their higher income brackets.