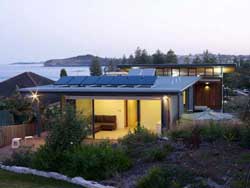 Australia’s banks and other mortgage providers reported an increase in loan approvals for home buyers in December as a positive reaction to the central bank’s benchmark rate reduction.

The Australian Bureau of Statistics (ABS) said in its compiled report for December, there was a 2.3% to 48,453 in the number of loans granted to build or buy houses and apartments in the country.

The statistics bureau said that this is so far the highest recorded home-loan approvals in more than 2 years, defeating analysts forecast of a 1.8% increase.

In November, a revised increase of 1.8% has also been recorded for home-loan approvals by the ABS.

The number of owner occupied housing commitments (trend) rose (up 499, 1.1%) in December 2011 compared with November 2011. Rises were recorded in commitments for the purchase of established dwellings excluding refinancing (up 442, 1.8%), the purchase of new dwellings (up 15, 0.7%) and the refinancing of established dwellings (up 48, 0.3%), while a fall was recorded in commitments for the construction of dwellings (down 7, 0.1%). The seasonally adjusted estimate for the total number of owner occupied housing commitments rose (up 1070, 2.3%) in December 2011.