New Zealand's house prices are rising rapidly again, the impact of the ban on foreign homebuyers having waned. During 2019, the nationwide median house price soared by 12.3% to NZ$629,000 (US$ 414,599), according to the Real Estate Institute of New Zealand (REINZ), a sharp improvement from the previous year's rise of 1.8%.

However Auckland, which accounts for about 30% of total property sales in New Zealand, saw a modest house price growth of 3.5% during 2019.

New Zealand saw spectacular house price rises of about 114% (82.5% inflation-adjusted) from 2001 to 2007. Then after a pause, there were six further years of substantial price rises 2012-2017, supported by strong economic growth. Because of this, housing in New Zealand has become really expensive, for a country with such a small population relative to its landmass.

The economy is projected to grow further by 2.7% this year and by another 2.6% in 2021, according to IMF estimates.

Last year, we found that the best rental returns available on apartments in Wellington had moved slightly ahead of Auckland. This may reflect a jump in prices of larger properties in Auckland, which would tend to reduce the rental returns. “Foreign buyers are mostly drawn to the Auckland area”, explains Bill Sandston, a real estate lawyer.

In Wellington, the capital of New Zealand, rental yields on 1 and 2 bedroom houses are now around 5.5%. Apartments, and particularly smaller apartments, tend to earn more - last year we found returns of from 6.88% to 8.43%

In Auckland, last year we found that rental yields on apartments ranged from 6.09% to 7.18%.

Property transaction costs analysis in New Zealand are rather low, and in regional terms, the total costs of buying and then selling a property are very attractive.

Rental Income: Rental income is taxed in New Zealand at progressive rates, from 10.5% to 33%.

Inheritance: There is no estate duty payable in New Zealand.

Residents: Residents are taxed on their worldwide income at progressive rates, from 10.5% to 33%.

Total transaction costs are relatively low at 4.23% to 4.80%, of which 3.5% to 4% (plus 15% GST) goes to the real estate agent as commission. The buyer pays the registration fees while the seller pays the agent's commission. Each party pays for their lawyers. There are no stamp duties. There are only two procedures needed to register a property and each procedure takes a day to complete. 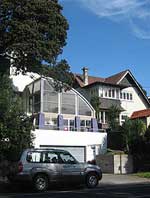 New Zealand law is neutral between landlord and tenant.

Tenancy Laws: The Residential Tenancies Act 1986 guarantees the rights of both parties and sets the parameters of their relationship.

Rent: Landlord and tenant can freely agree on the rent, and any increases are allowed provided that the landlord gives sufficient notice or there has been no rent increase over the last six months. A tenant can call upon a Tenancy Tribunal for rental assessment if he thinks the increase is excessive.

After the Asian financial crisis New Zealand experienced years of unbroken economic growth. The economy grew by an average of 3.8% per year from 1999 to 2007.

During the recent global crisis the economy contracted only briefly and mildly - by 0.4% in 2008. The economy grew slightly by 0.3% in 2009. New Zealand emerged swiftly from recession, after only five quarters of negative GDP.

The government recorded an operating surplus of NZ$7.5 billion (US$ 4.94 billion) during the 2019 fiscal year – more than double the forecast of NZ$3.47 billion and the biggest surplus since 2008, according to the Treasury. This was largely due to a surge in tax revenue, which increased by 7.8% to NZ$86.5 billion (US$ 57 billion).

The next general election is tentatively scheduled for September this year.

Where to buy property in New Zealand