After six years of strong house price rises, Australia's housing market is now cooling sharply.  This is mainly due to the introduction of market-cooling measures, including stricter lending restrictions and the imposition of higher taxes on foreign investment in the housing market.

House prices in the country's eight major cities fell by 7.7% during the year to Q1 2019 (-8.92% inflation-adjusted), in sharp contrast with the y-o-y rise of 2.2% a year earlier, based on figures from the Australian Bureau of Statistics (ABS). It was the fourth consecutive quarter of y-o-y house price decline and the biggest drop since data became available in Q1 2002.

Both the demand and supply of homes are now falling. Purchases of new dwellings plummeted by 28.3% y-o-y during the first five months of 2019, according to ABS, and purchases of established dwellings fell by 13.9%.

In the secondary market, established dwelling purchases fell by 13.9% in January to May 2019 compared to last year, or a decline of 16.3% by value.

Australia's slowing economy is not helping. In the first quarter of 2019, the economy expanded by 1.8% from a year earlier, the slowest expansion in more than five years, according to the ABS. The Reserve Bank of Australia (RBA), recently lowered its economic growth forecast for 2019 from 2.75% to 2.5%, and kept the official cash rate at a record low of 1% in August 2019, after cutting it by a cumulative 50 basis points in June and July, in an effort to bolster the economy.

Acquisition of residential real estate by foreign nationals and corporations is subject to FIRB approval. Foreigners are not allowed to buy an established (previously occupied) house. They may buy an unoccupied new dwelling, but only if the FIRB feels that the purchase will not add to the shortage of properties available to native Australians.

Our Sydney apartment survey is based on the number of bedrooms, because so few advertisements cite square metre measurements.

As we would expect, there are huge difference in the cost of apartments in Sydney depending on area, from relatively inexpensive Vaucluse, to high-priced darling Point and Potts Point. What doesn't differ much are the now low gross rental yields available on Sydney properties (the rental yield is the per cent return on the purchase cost of a property). This will not make landlords happy.

It is rare in Sydney to be able to earn more than 3.7%, and most apartments return less. Bear in mind that usually costs of various kinds will absorb at least 2% of those returns, so that net returns will be a lot lower than the gross figures.

Small apartments earn significantly higher rental returns than big apartments. This is particularly true in the more expensive districts, and if you are looking for yields the table will tell you that the exception to our generally low return figures are 1 bedroom apartments in Potts Point, which can earn gross rental yields of 4.9%.

Surprising, but worth investigating.

Taxes are high in Australia

Rental income: Rental taxable income earned by nonresidents are taxed at progressive rates, range from 32.50% to 45%.

An owner may also be required to pay a land tax annually, depending on his property classification for tax purposes and property location.

Capital Gains: Individuals are subject to a 50% reduction of the taxable gain if the asset is held for at least 12 months. Capital gains follow the individual income tax rates, at rates from 32.50% to 45% for nonresidents.

Inheritance: There are no direct taxes on inheritance.

Residents: Residents are taxed at a progressive rate on their annual income, from 0% to 45%, and are required to pay a 1.5% Medicare levy.

Buying costs are moderate in Australia

Roundtrip transactions costs are 3.76% to 21.15% of the property value. Stamp duty on property transfers ranges from 1.5% to 6.75%, and is paid by the buyer. It takes about five days to complete the five procedures needed to register a property.

Tenancy laws are neutral in Australia 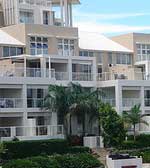 Australia ’s landlord and tenant laws are generally neutral. Both parties’ rights are well-protected by each states’ Residential Tenancy Act.

Rents: Rents can be freely negotiated, but increases are subject to review by a Tribunal provided the tenant makes an application. The rent cannot be increased before the end of the first year of tenancy in any state.

Tenant Eviction: A landlord can terminate a tenancy by giving notice in the approved form, or by using the tribunal. The legal system is highly efficient: it takes an average of 44 days to evict a tenant.

The country’s trade surplus surged to AUD 8.04 billion (USD5.46 billion) in June 2019 – its 18th consecutive month of trade surplus and the largest surplus on record, according to the ABS. In the first half of 2019, the trade surplus increased sharply to AUD 34.17 billion (US$23.19 billion) – more than four times higher as compared to AUD 7.56 billion (US$5.13 billion) in H1 2018. This was mainly due to the rising prices of iron ore and LNG exports, along with a drop in imports of non-industrial transport equipment such as cars and bikes.

It seems that Australia is benefitting from the ongoing trade war between the US and China, as it is now exporting more to both nations. In June 2019, Australia’s exports to China surged 35% y-o-y, while exports to the US also increased 15%.

Where to buy property in Australia

Will foreign investment in the Australian housing market fall?