Morocco’s property market is experiencing a pause from its previous headlong growth, as a result of Morocco´s economic slowdown.

During the year to Q2 2016, the nationwide residential real estate price index (REPI) fell by 1.1%, following a decline of 0.3% a year earlier, according to Morocco’s central bankBank Al-Maghrib.


There were wide local variations:

Riads are traditionally-shaped Moroccan houses, with grand salons giving onto a central tiled courtyard, often with a garden at the center.Previously, the majority of riad buyers were French. However, other foreigners such as Belgians, Britons, Italians, Americans, and a few Australians have joined the market, till the Riad market finally over-reached itself.

There are no restrictions on foreigners’ owning land in Morocco, except for areas designated for agricultural purposes.

In Marrakech, apartments have rental yields of between 6.5% and 7%.

However, round trip transaction costs are high in Morocco.

Morocco has the most advanced and diverse mortgage market in the region, according to the Center for Affordable Housing Finance in Africa (CAHF). There are a wide range of sources for mortgage lending, including private commercial banks, public banks, consumer credit companies, and microfinance companies. The typical term period is 20 years, and the loan-to-value ratio can reach 100% of the property´s appraised value.

Despite a significant reduction in poverty in recent years, about 20% of the country’s population (or 6.4 million Moroccans) struggles to afford decent housing. In contrast, the high-end market is well-supplied with around 820,000 units either vacant or used as vacation or secondary homes.

To deal with the situation, the government has implemented numerous housing projects over the past decade, including social housing initiatives and the mobilization of thousands of hectares of land. The Ministry of Habitat and Urban Planning has given real estate developers incentives to invest in social housing projects, and developers have committed to build 900,ooo units by 2020. Social housing sales are VAT exempt (for areas between 50 sq. m. and 80 sq. m.).

Lending for middle- and low-income families is accessible through partnerships between the government and banks:


As a result, Morocco’s housing deficit fell to about 642,000 units in 2014, according to the Oxford Business Group. To further improve the situation, the government plans to build an additional 170,000 units every year to bring down the deficit to around 400,000 this year.

Like other Middle Eastern countries, Morocco has experienced social and political unrest. But unlike other countries, Morocco’s political achievements, as well as the authorities’ responsiveness, have reduced the scale of the unrest.  It has certainly helped that Morocco has not experienced a single period of economic contraction during the entire period since 1997. This can partly be attributed to King Mohammed VI’s economic reforms.

There have also been notable social programs to reduce poverty, improve foreign relations and strengthening parliament, and a series of constitutional reforms aiming to improve democracy in the country:


However, unemployment remains quite high. Morocco’s sustained economic growth throughout the years caused unemployment to decline from 15.4% in 1997, to 8.9% in 2011. However unemployment has since risen to 10.2% in 2016, according to the IMF.

Despite positive achievements under King Mohammed VI, corruption remains very prevalent, reaching the palace itself. Royal involvement in business is a major topic in Morocco, unsurprisingly as the King is the Kingdom’s leading businessman and banker, and the royal family has one of the world’s largest fortunes. Decisions on big investments in the Kingdom are taken by only three people: the King, his secretary Mounir Majidi, and the monarch’s close friend, adviser and former classmate Fouad Ali Himma. Corruption originating in the royal palace especially affects the housing sector, as Wikileaks documents released in 2010 showed.

To counter the effects of EU’s slowdown and oil price swings to their economy, the Moroccan government sought help from the IMF, and was granted a loan worth US$6.2 billion. In exchange, the government will reform the pension system.

Regional terrorist attacks are putting off the tourists

The government’s tourist development plan, Vision 2010, achieved 9.3 million visitors in 2010, and aims for 20 million tourists by 2022. In 2013, tourist arrivals exceeded the 10 million mark, and in 2014, tourist arrivals rose 2.3% y-o-y to 10.28 million people, according to Ministry of Economy and Finance. Morocco’s “open skies” agreement with the European Union in 2006 has boosted air travel growth, with passenger numbers doubling in six years to 15.5 million in 2010, from 7.7 million in 2004.  Lower ticket prices and more domestic routes are being introduced by Royal Air Maroc. Meanwhile, a Casablanca – Tangier high speed rail project started in 2011 is expected to be fully operational by June 2018.  France accounted for about one-third of the total number of tourists in Morocco, followed by Spain, Arab countries, Germany, Italy and the United States.

However in 2015, Morocco welcomed only an estimated 10.18 million tourists, down by 1% on the previous year.  Then during the first three quarters of 2016, the number of foreign tourists fell by 3.6%.

“Since mid-2014 with the appearance of Isis and then with the two attacks in Tunisia, and with the Charlie Hebdo attack in France [in January], we have seen a dwindling of the number of tourists,” said Tourism Minister Lahcen Haddad.

“It is not highly significant in the overall picture, but very important for the French market, where we had a drop starting in mid-2014 — and it is still happening,” added Haddad. During the first three quarters of 2016, tourist arrivals from the UK, Germany, and France dropped 7%, 3%, and 2%, respectively. However, these declines were somewhat offset by increases in tourist arrivals from Russia, China, Netherlands, Belgium, and Spain.

To boost tourism, the government is investing in several projects in 2017, particularly to increase air flights into the country, to build new air bases in cities such as Fez and Agadir, and to promote Morocco as a leading tourist destination online, according to the Moroccan National Office of Tourism (ONMT).

“Several companies have programmed Morocco as a destination, including the return of Air France on the Paris CDG – Marrakech route,” said Abderrafie Zouiten, Director of the ONMT. “This is also the case for other low-cost airlines such as Air Arabia, EasyJet, Ryanair and Wizz Air, which recently launched a Warsaw-Agadir line, all equivalent to nearly 500,000 visitors in 2017.”

The work on the Mediterrania Saidia resort and Mazagan Beach Resort was completed in 2009, according to a Vision 2010 review from the Ministry of Economy and Finance’s Financial Forecasts and Studies division (Division des Etudes et des Prévisions Financières, DEPF). Mogador Essaouira resort opened in late 2011, while Port Lixus opened in 2012.

Aside from re-launching Plan Azur, other programs were also launched under the Vision 2020. This includes: a sustainable development plan (ecotourism), a cultural heritage programme, more developed leisure and health activities, and business tourism. 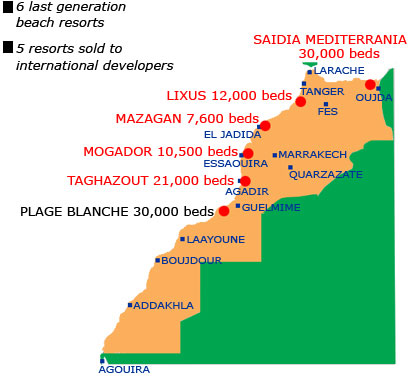 The attraction centres of Morocco

The cultural and physical attractions of Morocco centre on its traditional cities as Marrakech, Fes, Meknes, Casablanca, and Essaouira and on its one coastal resort, Agadir.

Marrakech was built in 1070 A.D.. It is famous for its palaces, open markets, and gardens. It is an extraordinarily exotic city, with its drama heightened by a location at the foot of the Atlas Mountains.

Marrakech has a complete tourism zone, Aguedal. A public transport system carries tourists from the district into the city centre for its souks and traditional markets selling copperware, wool merchandise, and carpets and kaftans. There are no less than 27 5-star hotels in Marrakech.

Marrakech is also considered as the country’s best and largest golf destination, with more than 10 different golf courses designed by famous names like Robert Trent Jones, Kyle Philips, Jack Nicklaus and Colin Montgomerie, among others. In fact, the International Association of Golf Tour Operators (IAGTO) has recently named Marrakech as the 2015 Golf Destination of the Year for Africa & Gulf States.

For over 400 years, Fes was the capital of Morocco. Founded in 789 A.D, it is the world´s oldest medieval city, and the largest. Considered Morocco´s intellectual and religious capital, it is a UNESCO world heritage site.

It was at the peak in the 14th century, and saw a fresh burst of glory in the 17th century. Narrow streets prevent the entry of cars into much of the city.

Here the French built a city in a French idiom, heavily influenced by the architecture of the Arab-Andalusian Empire. The city centre has a modernist grandeur, with plenty of space and light. Casabablanca is large, modern, and agreeable, with five golf courses less that an hour away.

Meknes was recognized as a World Heritage Site in 1996. Its physical location, on a plateau, made it Morocco´s trade crossroads. Its magnificent architecture was built by the 17th century Ruler, Sultan Moulay Ismail. Over 55 years he built palaces, mosques, gardens, and lakes. At his death the unfinished buildings including the royal palace - the Versailles of Morocco - which fills most of the old city.

Agadir is Morocco’s main seaside destination. Beautiful beaches, luxurious hotels, an ultra-modern airport are all combined with a moderate climate. Agadir’s beach is spectacular. 10 kilometres in length, it is clean and wide. Agadir enjoys a continuous breeze from the Atlantic, so that the temperature is pleasant all day.

A major earthquake completely destroyed the city in 1960. It was rebuilt from scratch. Agadir today is a modern city.

Tangier has a louche reputation dating from the 1920s, when it was an outpost for British paederasts. Then in the 1950s, beats, dropouts and writers like Burroughs and Bowles, Ginsberg and Kerouac, Leary and Eldridge Cleaver came to Tangier. It is a messy, rather ugly city. Now its coastline is being covered with resorts and new developments.

Essaouira is popular with independent travelers. This is partly because of its long beach, and partly because of its laid-back atmosphere. The town has long been magnet for Moroccan poets and creative talent. In the Place de Lâ Indpendence, which is the main square in the centre of Essaouira, there are dozens of caf s and restaurants. It is a pleasant place to eat, drink, and watch the world go by.