The Global Property Guide looks at inheritance from two angles: taxation, and what inheritance laws apply to foreigners leaving property in Morocco: what restrictions there are and whether making a will is advisable.


No inheritance taxes are levied in Morocco.

The transfer of immovable property is subject to a 20% withholding tax but gifts of real property between parents and children are exempt from taxation.

Thanks to Abu-Ghazaleh Legal (ABLE)

What inheritance laws apply in Morocco?

The inheritance of real estate owned by foreigners in Morocco is not subject to Morrocan law, unless one of two married individuals is Moroccan, or the individual is a refugee.

Inheritance in Morocco is prescribed for in Law No. 70.3, articles 321 to 395. These articles, and other family laws, are applicable to the following individuals:


Real estate owned by foreigners is subject to Moroccan law except for inheritance, where the national laws of the foreigner are applicable.

In accordance with article 332 on the stipulations of family laws, inheritance by foreigners is subject to the personal laws applicable in their country of nationality.

The Moroccan courts are competent where issues arise between foreign heirs on real estate located in Morocco. Article 28 of Moroccan Civil Law states: "the hearings for any real estate dispute, whether investigatory or possession, are to be held in the court located where the real estate which is the subject of the dispute is located."

There are no "necessary heirs" or "reserved portions" in Moroccan law.

A foreigner may dispose of assets in Morocco by means of a will, charity, or donation to whomever he/she chooses, provided that the disposal is in writing, and follows all the regulatory procedures including the registering of real property with the land registry, following payment of the necessary fees.

If there is no will, or other written contract, then foreign-owned real estate located in Morocco remains held as owned by the foreigner, as shares of an inheritance, and no other individual has the right to acquire ownership. All shares must be distributed equally between the heirs, which include the descendants of the deceased foreigner, and also his/her spouse, so long as an agreement to this effect, which is separate to the marriage contract, has been made. These shares can only be legally retained by the heirs if a certificate indicating each share has be issued by the competent court; however, in the event that one or more of the heirs wishes to sell the property, even if the other heirs object, then the property must be sold by the court, and the proceeds must be distributed equally between the heirs. 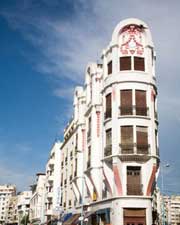 A foreigner has the right to make a will to dispose of real estate in Morocco.

Individuals have the right to release wills for their ownership in Morocco. The will can be released through a Notary Public or a lawyer, or the individual himself. The procedures for writing the will must be in accordance with Moroccan law. A foreigner need not be present in Morocco in order for the will to be released.

If a dispute arises over a will, and one of the disputing parties is a Moroccan resident, then jurisdiction falls with the Moroccan courts. Moroccan Law of Contracts is implemented if a dispute over ownership arises between multiple beneficiaries.

A foreign spouse has an independent financial position in Morocco.

If a foreigner is married to a Moroccan national, then Family law stipulates that each spouse is financially independent. The percentage of what is reverted back to each spouse by inheritance is in accordance with any agreement, separate from the marriage contract, concerning the management of funds gained through the marriage. Family law also prescribes general guidelines to follow should any dispute arise between spouses regarding the management of funds gained after the dissolution of marriage.

There can be no inheritance between spouses if one spouse is a Muslim and the other is a non-Muslim (or whomsoever the Shariah prohibits relationships with.)

Minors can inherit property in Morocco.

Maintaining property in Morocco is governed by Civil Law.

A person who has a legal interest in property in Morocco can undertake precautionary measures to ensure and retain his/her rights of ownership. Such procedures are immediate, before any action on the property, such as sale, donation, or impoundment. (Impoundment is a concept of Moroccan law which allows a debtor to sell property in order to pay off his/her debt).

If a third party claims rights to real estate, or a dispute arises to its ownership or transferability, then it is permissible for the third party to undertake court proceedings, in addition to impoundment, to permit anticipatory restrictions before the sale of the property. Such restrictions can be made as follows: