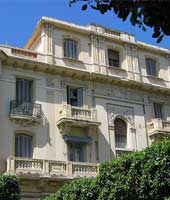 During the 1990s, Algerian politics was dominated by a struggle between the military and Islamist militants. In the 1992 general elections, three years after the previous ban on political parties was lifted, the Islamic Salvation Front (FIS) won. The military, which had ruled the country since Col. Houari Boumedienne overthrew democratically-elected independence leader Ahmed Ben Bella in 1965, refused to accept this.

The election was annulled, precipitating a bloody civil war in which more than 150,000 people were killed by the military as much as by the militants.

The situation began to be resolved after 1999, when President Abdelaziz Bouteflika, the military's candidate, despite being elected unopposed after other candidates withdrew because of poor security, succeeded in getting a Law on Civil Concord approved by referendum, and released thousands of Muslim militants.

President Bouteflika is generally credited for restoring calm, though some campaigners say abuses by the security forces go on, and torture of detainees continues to be reported. Yet despite some continuing unrest, and protests by the Berber population, the Islamist rebels have been increasingly marginalized.

The state of emergency is still in place, but Bouteflika secured a landslide election victory in April 2004. He promised to seek "true national reconciliation" during his second term. Voters backed a second amnesty for the remaining militants, laid out in the president's "charter for peace and reconciliation", in a 2005 referendum. The amnesty began in March 2006.

A veteran of the war for independence from France, Mr Bouteflika was Algeria's foreign minister for 16 years until 1979.

In May 2006 Algeria announced it was repaying all its $8bn Paris Club debt, in a move reflecting its economic recovery. In September 2006, the leader of the banned Islamic Salvation Front (FIS), Rabah Kebir, returned from self-imposed exile and urged rebels to disarm.

The Algerian government has embarked on an aggressive liberalization program to attract foreign direct investment. Ordinance No. 01-03 treats Algerian nationals and foreign investors equally. Investors may enjoy benefits such as exemption from transfer tax on all real estate purchases made for the specific purpose of the investment and exemption for ten years, from the date of purchase, from land tax on real estate which is directly involved in investment.

Owning a property in Algeria which can be rented out, or purchasing a property to be used as a hotel or resort, can be beneficial. However, it would be wise to think carefully about purchasing real estate in Algeria because of the political strife; conflict is very much still an issue in the country.

Income tax can be high in Algeria

Rental Income: Rental income earned by nonresidents is taxed at a flat rate of 7%.

Capital Gains: Capital gains realized from properties unconnected from business activities are subject to capital gains tax at a flat rate of 5%.

Inheritance: Inherited property received by direct line relatives (specifically children, spouses, and parents) are taxed at a flat rate of 3%.

Residents: Residents are taxed on their worldwide income at progressive rates, up to 40%.

Buying costs are low in Algeria