Is Paraguay too much trouble?

Property prices in Paraguay are among the lowest in South America but buyers must be cautious.

Due to lack of jobs in the countryside and the commercialization of agriculture, peasant groups staged a series of land invasions in 2004. These occupations often resulted in the expropriation of owners' estates. The government subsequently validated peasant ownership. Theoretically the original owners should have been compensated, but this has rarely been done.

There are no restrictions on the ownership of property by foreigners. They may also engage in commerce or industry without limitation.

Yields are low in Asuncion 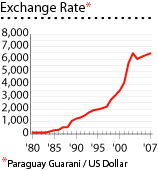 The capital city of Asuncion is the only place where property rights are secure enough to make it advisable to buy.

Leasing real property in Paraguay is also liable to VAT at the reduced rate of 5%.

Capital Gains: Occasionalcapital gains realized by nonresidents from selling Paraguayan property are taxed at the standard withholding tax rate of 20% levied on 50% of the sales price (i.e. 10% withholding tax on the gross income).

Inheritance: There are no wealth, inheritance, or gift taxes.

Residents: Residents are taxed on their Paraguayan-sourced income at a flat rate of 10%.

Rent: Although initial rents and rent increases can be agreed upon freely, it may take up to two years to collect unpaid rents.

Tenant Eviction: It is also very difficult to evict tenants. Politics usually intervene with the corrupt and incompetent judicial system.

Troubled past... and present

Even after the end of president Alfredo Stroessner’s 35 year reign, his party, the National Republican Association-Colorado Party, continues to rule.

However, factional splits caused the assassination of a vice-president and the resignation of the president in 1999. The same year, Senate President Luis Gonzalez Maachi was appointed caretaker president.

An attempted coup against Maachi’s government was foiled in 2000. In 2002, he declared a state of emergency due to violent street protests. In 2002, he survived an impeachment attempt over charges which include corruption. After his term, Maachi was put on trial on corruption charges and barred from leaving the country.

In August 2003, a new administration was inaugurated under President Nicanor Duarte Frutos, who has proposed major economic and political changes. His tasks are daunting.

Paraguay is a full member of the MERCOSUR together with Argentina, Brazil and Uruguay, the largest commercial area in South America.

About 33% of the population lives below the poverty line. Inequality is among the most extreme in the world. Corruption is a fact of life. Paraguay has become a regional center for smuggling, money-laundering and organized crime.