In the eleven year of a strong housing market, Colombia's house and apartment prices went up by 8% (2.66% inflation-adjusted) during the year to Q1 2017, according to the Banco de la Republica Colombia (Banrep) index, which covers second-hand houses and apartments.

Gross rental yields in Bogota, Colombia - the return earned on the purchase price of a rental property, before taxation, vacancy costs, and other costs - are quite attractive, though significantly lower than they were a few years so (our research suggests that they have fallen over the past year). Gross rental yields are an important consideration even for those who do not intend to become landlords, because a high rental yield indicates that the property market is reasonably priced.

Across the Bogota districts that we cover, gross rental yields range from 5.7% to 7.1%.  Given that the cost of managing a property can typically be estimated to be around 2% of the yield, this still means that property in Bogota is reasonably valued, and will yield a reasonable return to the investor.

and Residential transaction costs in Colombia compared to the continent

Taxes are generally high at 33%

Rental Income: Rental income earned by nonresidents is taxed at a flat rate of 33%. Income-generating expenses are deductible when computing taxable income.

Capital Gains: The capital gains tax is levied at a flat rate of 10%.

Inheritance: Inheritance is taxed at 33% for non-residents.

Residents: Residents are taxed on their worldwide income at progressive rates, from 19% to 33%.

Rental system is neutral to pro-landlord 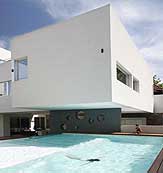 Colombia’s rental market legislation is neutral between landlord and tenant. Some aspects are pro-landlord, while others are pro-tenant.

Rent Control: The most pro-tenant aspect of the law is that monthly rents cannot exceed 1% of the property value, giving the landlord a 12% maximum yield. But in reality, if the tenant does not complain, the landlord can get more.

Tenant Security: The rules for renewal and termination tend to favor landlords. If the tenant owes rent, the landlord can seize his properties. And even if eviction proceedings are long, the tenant is required to pay the rent for the duration of the proceeding.

Better economic outlook expected during the rest of 2017 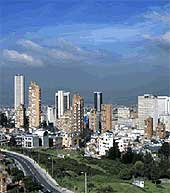 The economy's weaker performance was due to the 6.5% y-o-y contraction in the oil and mining sector, the main culprit for Colombia's economic slowdown over the last three years, since oil is one of Colombia's main exports. In contrast, the financial, insurance, business services, and real estate sector (which official statistics consider as one industry) surged by 5% y-o-y, making it the best performing sector in 2016. Other strongest-performing industries include construction (4.1% y-o-y) and industrial manufacturing (3.0% y-o-y).

In Q2 2017, the economy slightly grew by 1.3% y-o-y, following 1.2% in the first quarter. The IMF expects Colombia's economy to grow by 2.3% in 2017. "As the current year elapses, the economy will gradually recover from the shocks that have affected growth," says Bancolombia in a note to investors. "We estimate that the acceleration cycle that will begin this year will extend over the next two years. Our base scenario for 2017 growth is 2.3%."

The export decline also caused the Colombian peso's devaluation. In February 2016, the currency reached a historic low of around COP 3,400 per USD, having lost about 28% of its value over the past 12 months, but has since recovered to under USD1 = COP 3,000.

In 2017, Banco Bilbao Vizcaya Argentaria (BBVA) expects a slight appreciation of the average exchange rate, due to higher external interest rates, factors such as "the higher oil prices, the closing the current account deficit, and the appetite of foreign capital for the country will mean that the average exchange rate will be around 2,973 throughout the year".

Conflict with FARC has ended

The country's 52-year war with the FARC is finally over, as the last batch of weapons were turned over in a UN-supervised disarmament by the FARC in August 2017, a year after the Colombian government and the Revolutionary Armed Forces of Colombia (FARC) announced their agreement to a ceasefire deal.

"With the laying down of arms ... the conflict is truly over and a new phase begins in the life of our nation," according to President Santos.

The original June 2016 ceasefire deal, ending a conflict that had lasted half a century, was rejected by voters in a national referendum (50.2% against to 49.8% in favour). A revised peace deal signed on November 24, which was approved by the Colombian Congress on November 30, 2016.

The FARC formally ceased to be an armed group on June 27, 2017, and turned over its weapons to the United Nations. FARC later on announced its transformation as a legal political party and is expected to participate in the upcoming elections next year.