In January 2016, VAT of 19% was imposed on sales of properties in Chile by "habitual sellers" such as real estate companies, or persons who sell their properties in less than a year.

House prices in Greater Santiago fell by 1.8% in 2016, due to the implementation of VAT and weak economic growth. Nation-wide home sales dropped by 34.3% to 53,309 units, with the biggest price declines for mid- and lower-priced homes (demand for high-end properties remained robust). Construction also fell, with housing starts down almost 36% in 2016.

However the market is now bouncing back.  During the year to Q1 2017 home sales in Greater Santiago rose by 46% to 7,324 units, according to the Chilean Chamber of Construction (CChC).  The average "real" price of new apartments in Greater Santiago did fall - but by just 0.4% during the year to March 2017, according to the CChC.  However in Central Santiago, new apartment prices rose by 6.4% during the year to March 2017, and in Western and Southern Santiago by 3.4% and 2.8%, respectively (all figures 'real', i.e., inflation-adjusted).   New apartment prices in Eastern Santiago remained flattish, with a real price increase of 0.9%.

Any individual or corporate body can acquire and own real estate in Chile, whether or not they are residents. However there are some restrictions regarding land located near the boundaries of the country. Chile has strong legal protection of property rights.

Gross rental yields in Santiago and Viña del Mar - the return earned on the purchase price of a rental property, before taxation, vacancy costs, and other costs - are moderate. Gross rental yields are an important consideration even for those who do not intend to become landlords, because a high rental yield indicates that the property market is reasonably priced.

These are reasonable prices, and by the standards of the continent, Santiago has a comparatively low price to income ratio, with a typical 120 sq. m. apartment 17 times average GDP per capita.

Rental Income: Nonresidents earning Chilean income are subject to AT, which is levied at 35% on gross income.

Rental incomeis subject to FCT at a flat rate of 25.50%. FCT and property taxes are credited against the taxpayer’s AT liability.

Leasing of real estate is subject to VAT at 19%. 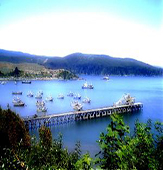 Inheritance: Inheritance, gifts and donations tax rates vary according to the degree of relationship and the value of the inheritance, from 1% to 35%.

Residents: Residents are taxed on their worldwide income. 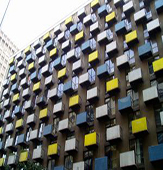 The total roundtrip transaction cost, i.e., the cost of buying and selling the property, is around 5.30% to 5.40% of the property value. This includes the estate agent's fee of 4%, which is split evenly between buyer and seller.

If the property is newly built by a developer, the transaction cost will be higher, due to the 19% VAT imposed on such properties.

Chilean law is neutral between landlord and tenant, following fairly recent changes in the law.

Rents: The rent can be freely agreed upon. There is no legal maximum for deposits.

Tenant Eviction: Eviction of tenants may be difficult or easy depending upon the nature of the agreement. Monthly tenancies can be terminated by giving two months' (notarized) notice of eviction.

However tenants in fixed term contracts and in contracts exceeding one year can only be evicted through long judicial proceedings.

The Chilean economy opened the first quarter of 2017 with 0.1% y-o-y growth, the country's weakest performance since 2009. Exports declined by 4.9% y-o-y, due to a sharp contraction in copper production caused partly by a strike at BHP Billiton’s Escondida copper mine from February to March 2017.

Fiscal discipline, strong economic management
In May 2010, Chile became OECD´s first Southern American member, highlighting reduction of poverty from 45% in the late 1980s to around 14% in 2009. There were other advances, such as strengthening of state institutions and fighting corruption.

Fiscal discipline is one of the pillars of Chile’s solid international image. From 2000 to 2012, Chile recorded an average budget surplus of 1.7%, reaching a record high of 8.8% of GDP in 2007. The budget surplus not only transformed Chile from a debtor to a creditor country, but also placed the country in solid position to weather global economic volatility.

During the 2009 recession, the Chilean government increased spending by 16%, availing of funds specially set aside from sales of copper profits. A fiscal stimulus program worth around 2.4% of GDP was implemented, which led to a fiscal deficit of around 4.7% of GDP by the end of 2009. The deficit narrowed to 0.5% of GDP in 2010 as the economy recovered.

In 2016, the fiscal deficit was estimated to be around 3.1% of GDP and is expected to widen further to 3.3% of GDP in 2017, according to Finance Minister Rodrigo Valdés.

Currently, Chile's unemployment is subdued, at 6.7% as of April 2017, despite its restrictive and complicated labour laws, and relatively generous social benefits.

Where to buy property in Chile