Demand and supply are now falling. The total number of homes sold in one- to two-dwelling buildings fell by 4.9% y-o-y to 52,299 units in 2018, according to Statistics Sweden.

Yields are moderate in Stockholm, Sweden

Swedish property yields are moderate. This year, we were unable to get yields figures because rents were hard to get in sufficient quantity to be reliable. When we surveyed them last year, mid-sized central Stockholm apartments (80 to 120 sq. m.) had the most generous gross yields, at 6 to 7%. Other sized properties seemed likely to have lower yields, at around 3 to 4%, and properties in suburban Stockholm also had relatively lower yields, at 3% to 5%, while apartments in the centre of the second-largest city of Gottenburg can yield around 5% to 7%.

Because rents are tied to the age of the property, the higher yields in the city-centre reflect partly the newer housing stock in those areas.

Capital Gains: Capital gains tax is levied at a general rate of 30%. Acquisition costs are deductible when computing the taxable gains.

Inheritance: Inheritance tax in Sweden has been abolished since January 2005.

Transaction costs in Sweden are low 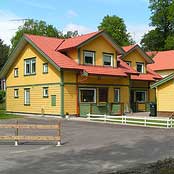 Sweden’s rental market is strongly pro-tenant. The system is enormously counter-productive. Eight per cent of the Swedish population is queueing for a new apartment, with an average waiting time of 10 years

Rents: Rents are set far below reasonable returns-on-investment. Rents are little influenced by location, so that metropolitan units are especially under priced. The system is enforced by Rent Tribunals.

Tenant Security: Tenants have a right to prolong their contract, essentially for ever. The rule is totally asymmetric; a tenant may at all times give 3 month’s notice, even if the contract is fixed for a given period, to terminate the agreement.

In September 2006 the Alliance for Sweden, a centre-right coalition headed by Moderate Party leader Fredrik Reinfeldt, unseated the Social Democrat Party of Goran Persson. Since then, the housing system has been high on the agenda. An ongoing state review of the system argues for the removal of the current rental ceiling, so that private housing companies and individuals could set market rents.

Recently, the National Institute of Economic Research revised downwards its 2019 growth projections for Sweden to just 1.3%, from an earlier forecast of 1.9%, amidst a decline in housing investment. The housing market and construction sector are key drivers of economic growth in Sweden.

“We’ve seen a halving of new construction projects this year compared with 2017 and 2018. This affects the Swedish economy,” said Anders Lago of the Swedish housing association HSB. “Perhaps there will be a decline in GDP by half a percentage point. And that slows down growth in Sweden”

However government finances are expected to weaken in coming years amidst the economic slowdown.

Unemployment stood at 6.5% in January 2019, down from 7% a year earlier, according to Statistics Sweden.

Where to buy property in Sweden