The average price of existing flats in Poland's 7 big cities (Warsaw, Gdańsk, Gdynia, Kraków, Łódź, Poznań, and Wrocław) rose slightly by 0.3% (1.3% inflation-adjusted) during the year to Q1 2016, according to the Polish central bank, Narodowy Bank Polski (NBP). During the latest quarter, house prices were up by 0.1% (0.8% inflation-adjusted).

Moreover, REAS also stated that demand remains strong for rental apartments. "There is still a lot of interest in buy to let investments. Considering the lowest level of interest rates on bank deposits since 1990, low inflation, as well as stable rental rates, the attractiveness of rental investments is still very high."

House prices in the country's major cities are still below their pre-crisis peaks seen in mid-2008: 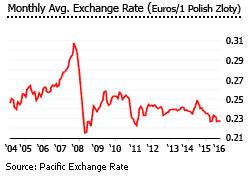 But Poland's bust has been remarkably small, given the amazing scale of its housing boom from 2004 to 2007. This was fuelled by an inflow of investment due to the country's accession to the EU, record low interest rates, and mortgage financing development.

However during the 2008-09 crisis the Polish Zloty fell dramatically, and mortgages - mainly denominated in foreign currencies - became unrepayable.

The average interest rate for house purchases in Poland declined slightly to an average 3.5% in May 2016, from 3.6% in the same time the previous year, according to the NBP.

Over the same period:

The NBP kept its own key interest rate for 16 straight months in July 2016, at historic low of 1.5%. Despite falling consumer prices, the key rate is expected to remain unchanged in the nearest term.

"[T]he council maintains its assessment that ... the current level of interest rates is conducive to keeping the Polish economy on the sustainable growth path," said the country's Monetary Policy Council (MPC).

Moreover, the new central bank governor, Adam Glapinski, said that "Brexit wasn't an earthquake, and so far it's had zero impact on Poland. It causes huge uncertainty, however. And the best choice in this situation is to wait and see."

Apartments in Srodmiescie, which includes the historic neighborhoods of the Old Town (Stare Miasto) and the New Town (Nowe Miasto), offer gross rental yields ranging from 5.5% to 5.8%.

In the other popular Warsaw areas Ursynów, Wilanów, and Żoliborz, apartments offer good rental returns of around 6.4%.

Despite attractive rental yields, the big downside is that round trip transaction costs are high in Poland.

Renting is an unavoidable choice for more and more Poles, as stricter requirements for mortgage financing, uncertainty in the labour market, and low growth prospects, discourage households from incurring long-term debts. The movement of people from other cities to the capital, especially students or young people looking for work, also drives people to rent.

About 21% of households in Warsaw rent apartments, with half of these in social and communal housing. Most residential properties in Poland are owned by private individuals.

About 10.7% of the dwelling stock is rented at lower rates, with 5.7% in communal or social housing, 2.1% in cooperative tenancy, 1.2% in state-owned companies, 1.2% the State Treasury, and 0.5% in public building societies, according to the 2011 National Census. The remaining dwelling stock is primarily owner-occupied.

In Q1 2016, dwelling completions surged 18% to 37,400 units from the same period last year. A substantial proportion of Poland's dwelling are being built by private investors, rather than developers.


The Polish residential market lags behind Western European countries in terms of quality, age of stock, and level of market saturation, according to Ernst and Young. Of the 13.85 million residential units in Poland, around 72% were built before 1989, mostly during the communist era using prefabricated technology, which tends to be of very poor quality. Modern units built from 2000 onwards comprise only about 12% of the total and are concentrated primarily in six areas: Warsaw, Krakow, Poznan, Wroclaw, Tricity, and Lodz.

Poland's housing supply constraint was "mainly administration driven and consists of the limited number of zoning plans, covering below 30% of country's area", according to Ernst and Young's 2015 report. The lack of zoning plan leads to administrative procedures taking from a few months to a year to resolve.

In Q1 2016, the number of applications for subsidies from the Mieszkanie dla Mlodych (MdM) program rose by 6.1% from the previous quarter, to reach around 3,500 applications. This represents about 25% of all units sold during the quarter.

Poznan saw the biggest quarterly increase in the number of applications of 18% in Q1 2016, followed Wroclaw with 11% q-o-q rise.

MdM is a housing subsidy program introduced by the government in early 2014, aimed at helping young people aged up to 35 (either single or married) buy their first new flat. However, the program places caps on both apartment size and price per square meter.

The program assumes a 10% subsidy for childless families and singles and a 15% subsidy to families with children and single parents. Another 5% subsidy is granted to families with three or more children. In the case of house construction, the subsidy will come in the shape of partial VAT return on building materials used.

Poland's mortgage market grew sharply from just 1.3% of GDP in 2000 to 9.9% of GDP in 2007, and 21% of GDP in 2015 - but remains low by international standards. The expansion can be attributed to the rapid growth in both zloty-denominated and foreign currency-denominated housing loans in recent years.

In May 2016, total housing loans outstanding rose by 2.2% to PLN379.73 billion (EUR86.64 billion) from the same period last year, according to Polish central bank, Narodowy Bank Polski (NBP). Over the same period:


Aside from Polish nationals, foreign investors have been fuelling demand. From just about 2% in 1996, the proportion of foreign currency-denominated housing loans (including Swiss franc loans) reached its peak at more than 69% in 2008. However the proportion has declined since and was around 44% in 2015, according to NBP.

The Polish economy bounced back in 2014 with 3.3% growth, fueled mainly by strong domestic demand.

In May 2015, Law and Justice Party (PiS) candidate Andrzej Duda won the presidential elections, displacing Bronisław Komorowski. Duda, a conservative, won 51.55% of the vote, as opposed to Komorowski's 48.45%. The new president, who assumed office in August 2015, vowed to reverse the increase in the retirement age, and increase tax breaks for the poor.

In the first quarter of 2016, the economy expanded by 3% from a year earlier, down from 4.3% growth the previous year. During the latest quarter the economy actually contracted by 0.1%, but is expected to recover in the second half of 2016 with strong private consumption supported by a new child benefit scheme.

Core inflation fell to -0.8% during the year to June 2016, according to the central bank.