This sharp improvement was also seen in the major cities:

Demand is now surging, with residential property transfers in Athens rising by double-digit figures in the past four years. Construction permits soared 24.5% to 11,744 units during the first nine months of 2019, following annual rises of 10.1% in 2018 and 9% in 2017, according to the Hellenic Statistical Authority, though the total remains far below the 70,000 to 80,000 permits issued annually from 2004 to 2007.

To revive the housing market, the Greek government has offered residence to non-EU investors purchasing or renting property worth over €250,000, similar to Hungary, Spain and Portugal. The plan is valid for five years and is open to renewal.

Reducing taxes has been one of the priorities of the Mitsotakis government.

The Greek economy grew by around 2% in 2019, according to the International Monetary Fund (IMF) – slightly up from last year's 1.9% expansion and the highest growth since 2007.

The IMF expects Greek GDP to grow by.2% this year but the European Commission is slightly more optimistic, projecting 2.3% growth.

Rental returns are moderate to good in Greece

How much will you earn? In the centre of Athens gross rental yields on apartments are quite good, at around 4.2% for apartments of 120 square metres (sq. m), but proportionately more for smaller apartments (5.7% for 75 sq. m.). To define terms, the gross rental yield is the rent the landlord will earn - before taxation, vacancy costs, and other costs - compared to the purchase price of the property.

In Kolonaki, an area where the elite of Athens used to live before many moved to the suburbs, full of high end shops and ritzy cafes at the base of Mount Lykavettos, the gross rental yield for smaller apartments (50 and 85 sq. m) averages 6.3%.  For larger apartments the return is less good.

How much do apartments cost? In our latest survey, the average price per square sq. m. in Central Athens ranges from around EUR 2,400 to EUR 3,600.

Apartments and villas in Crete cost around EUR 1,400 per sq. m.. Yields are lower here than in Athens, at least for apartments (for which we had yields research the year before last, but not this year) at around 3%.

How easily will you rent your property? Properties are reasonably easy to let. Athens is a large city with traffic problems, and many people need to rent. Crete has a thriving Airbnb letting scene.

Income tax is moderate to high in Greece

Rental Income: Rental income is taxed at progressive rates, from 15% to 45%.

Capital Gains: Capital gains realized from the sale of property held for less than 5 years are taxed at a flat rate of 15%.

Inheritance: Inheritance tax is levied at different rates depending on the relationship between the deceased and the beneficiaries. 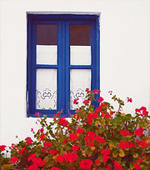 Rent: Rents are freely negotiable between the tenant and the landlord. There is no legal limit on the deposit.

Tenant Security: All residential rentals have a minimum legal duration of three years. If a contract for a lesser period is negotiated, the three years period applies to the landlord, but not to the tenant. A contract for three years or longer terminates automatically at the end of the contract period, without need for notice.

The Greek economy grew by around 2% in 2019, according to the International Monetary Fund (IMF) – slightly up from last year’s 1.9% expansion and the highest growth since 2007. The IMF expects the Greek economy to grow further by another 2.2% this year but the European Commission is slightly more optimistic, projecting a 2.3% growth.

Consumer prices rose slightly by 0.2% in November 2019 from a year earlier, according to the Hellenic Statistical Authority. Inflation is projected to accelerate to remain low at 0.6% this year and 0.9% in 2021, according to the European Commission.

Where to buy property in Greece

Athens real estate: the last chance to grab a bargain before economy picks up

Is the leader in EU citizenship investment, Greece, welcoming crooks with open arms?

The best cities to buy property in 2018

Why real estate prices in Greece are set to rise?