This was supported by the Association of Danish Mortgage Banks (ADMB), which showed that prices continue rise for all property types and for almost all regions during 2018:

Residential construction activity continues to fall, which partly explains the continued increase in prices despite weak demand. In 2018, permits fell by 14.6% y-o-y to just 22,619 units, following 15.8% decline in 2017, according to Statistics Denmark.

Effective January 1, 2018, the government introduced tighter lending regulations, in an effort to reduce the share of more risky interest rate and repayment-free mortgages on the overall mortgage lending portfolio of banks. Banks will be limited from offering housing loans that do not have fixed interest rates, or monthly installments. Moreover, the number of mortgages available to households seeking to borrow more than four times their income, or more than 60% of the value of the property will be heavily restricted.

&quot;These are reasonable guidelines that should ensure that homeowners are more robust,&quot; said Lars Krull of Aalborg University.

The move is also supported by Nordea economist Jan Storup Nielsen, who believes that the move &quot;represents a major departure from previous policies and will likely help reduce the risk of a new housing bubble.&quot;

In the past recent years, the International Monetary Fund (IMF) had been urging the Danish government to reverse its negative interest rates mandate and introduce new policies to avoid a disastrous housing bubble.

Residential property prices in Denmark have been stable during the past three years (2012-2014), according to StatBank Denmark. In Copenhagen, our research suggests that the price of apartments has remained stable, with maybe some upward price movement for the smallest apartments. Meanwhile, in Copenhagen, rents have also been stable.

The result is that rental yields on apartments in Copenhagen have hardly moved over the past two years. Apartments of 120 square metres (sq. m.) yield 4.84%. Apartments of 50 sq. m. yield 5.27%.

These are moderate yields.

Taxes are moderate in Denmark

Rental Income: Rental income subject to state income tax, from 8.08% to 15%, and municipal income tax at a flat rate of 24%. Landlords have two options when computing for taxable income: (a) itemized deductions, and (b) standard deduction to account for income-generating expenses.

Capital Gains: Capital gains from sale of immovable property in Denmark earned by nonresident owners are taxed at a special rate of 24%, because they do not pay any county income tax.

Inheritance: Inheritance of the immediate family (children, grandchildren, parents) is subject to total estate tax at a flat rate of 36.25%. No tax is levied on the spouse’s inheritance.

Residents: Income earned by residents is taxed at various progressive rates, up to around 55.60%. Tax on income consists of state tax, AM tax, municipal tax, and church tax.

Roundtrip transaction costs in Denmark are among the lowest in Europe, at 1.23% to 3.23% of the property value. The greater part of the costs is accounted for by the real estate agent’s commission at 0.5% to 2%, usually paid by the seller. 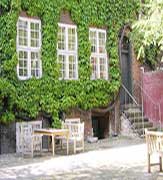 Rent Control: There are five different forms of rent control in Denmark depending upon the age of the building and the system is very complex. However, rents on dwellings constructed after 1991 are exempt from rent control.

Legal Disputes: The system is confusing. “It is not possible for lay people to properly calculate the maximum rent applicable to a particular tenancy,’ notes the EUI report on Danish Landlord and Tenant law. “This is the cause of many legal disputes, which must be resolved by the judicial system.”

In 2008, Denmark was one of the first countries in Europe to go into recession. The economy contracted by 0.5% in 2008 and by 4.9% in 2009. Prime minister Helle Thorning-Schmidt, a Social Democrat (2011-2015), adopted austerity measures that improved government finances, and the country recorded a public budget surplus of 1.1% of GDP in 2014, after several years of deficits. Mrs Thorning-Schmidt’s measures were however unpopular, resulting in her party’s defeat in 2015 and her resignation. In June 2015, Lars Lokke Rasmussen leader of the centre-right liberal party, Venstre, returned for his second innings as Denmark’s PM, and ironically adopted inflationary policies.

The economy is expected to expand by 1.6% this year and by another 1.3% in 2020, according to the European Commission.

Denmark’s unemployment was 4% in February 2019, down from 4.3% a year earlier and far lower than the 7.8% jobless rate recorded in the euro area (EA19) over the same period, according to Statistics Denmark.