There have been eight long years of house price falls. Now Cyprus' housing market is gaining momentum, with both sales transactions and construction activity rising strongly.

During the year to Q1 2019, the nationwide residential property price index rose by 4.3% (2.9% inflation-adjusted), its tenth consecutive quarter of y-o-y growth, according to the Cyprus Statistical Service (CYSTAT). In fact, it was the biggest annual rise since Q2 2008.

Likewise, the number of dwelling permits soared 38.4% y-o-y to 2,481 units during the first four months of 2019, according to the Statistical Service of Cyprus.

This across-the-board housing market improvement is partly driven by Cyprus' robust economic growth over the past three years. In 2018, the economy expanded by 3.9%, following growth rates of 4.8% in 2016 and 4.5% in 2017, according to the Statistical Service of Cyprus. However, economic growth is projected to slow to 2.9% this year and to 2.6% in 2020, amidst slowing tourism and escalating trade tensions globally, according to the European Commission.

Despite this, the housing market is expected to continue to improve in the coming months, thanks to strong demand and improvements in the banking system.

The Cyprus real estate market has historically been divided into the major urban centres of Nicosia, Limassol and Larnaca (primarily driven by local demand); and the seaside resort areas of Paphos and Famagusta, which are mostly driven by foreign demand. The economic decline of recent years affected both areas.

Foreigners can buy one home in Cyprus, and are entitled to hold land freehold, but there is a maximum limit on land ownership of 3 donums (4,014 sq. m.).

Rental returns in Cyprus are reasonable, while property is inexpensive

Property prices. Property is not expensive in Cyprus, with prices around €1,600-3,4000 per square metre (sq. m.). Smaller properties cost rather more per sq. m. than larger properties.

Property rents. Apartments of 120 sq. m. cost around €700-€800 per month to rent in Larnaca and Nicosia, and probably more in Limassol, though this year we were not able to find enough properties to bring you reliable figures.

If you are buying specifically with a view to renting out your property, very small apartments in Nicosia appear to give you higher yields.

Property returns. Cyprus has not traditionally been a great location to be a landlord, because of moderate rental returns. But while gross rental yields in Cyprus have remained steady over the years, they have fallen almost everywhere else as a result of the asset-inflationary effects of low interest rates. Result: Cyprus now looks comparatively attractive as a place where buying prices are low, so that capital gains on property are conceivable. However, it is always extremely hard to forecast which locations international buyers will seize upon as attractive.

Rental income tax is low to moderate in Cyprus

Capital Gains: Capital gains realized from the sale of immovable property are taxed at 20%, with a lifetime exemption of 85,430 if the property was owner-occupied for at least 5 years.

Inheritance: There are no inheritance taxes or estate duties in Cyprus.

Residents: Residents are taxed on their worldwide income at progressive rates, from 0% to 35%.

Total transaction costs can be high

The transfer tax rate ranges from 3% to 8%, depending on the purchase price of the property. If the property is in joint names, the property value is halved, leading to lower transfer fees. 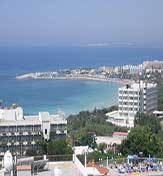 Rent Control: The rental market can be divided into two broad categories: Houses controlled by the Rent Control Law (1983), and the free market.

Foreigners are not covered by the provisions of the Rent Control Law, except the non-Citizen wife of a citizen of the Republic, and legal entities controlled by non-residents.

Tenant Eviction: Eviction of tenants is relatively difficult, especially in the case of ‘statutory tenants’ protected by the Rent Control Law. It takes an average of 360 days to evict a tenant.

Cyprus’ economy remains strong, registering a solid growth of 3.9% in 2018, driven by strong domestic demand and favourable external demand for Cypriot exports, according to the Statistical Service of Cyprus. In Q1 2019, the economy expanded by 3.4% from a year earlier, down from an average growth of 3.8% in the previous three quarters.

Economic growth is projected to slow to 2.9% this year and to 2.6% in 2020, amidst slowing tourism and escalating trade tensions globally, according to the European Commission. Tourist arrivals fell by 1.1% y-o-y in the first five months of 2019, in contrast to a 7.8% growth last year.

“Consumer sentiment has deteriorated over the first half of 2019 and business confidence has steadied, suggesting that growth could be less buoyant in the months to come,” said European Commission. “Private consumption is nevertheless expected to remain resilient, given positive labour market developments.”

Inflation was -0.3% in July 2019, down from 2.3% in the same period last year, according to the Statistical Service of Cyprus. It was the second straight month of decline and the lowest level in 16 months.