Supply is falling despite robust demand. In the first half of 2019, the total number of dwellings approved for construction in Austria fell almost 2% y-o-y to 35,623 units, following a 13.7% decline in 2018, according to Statistics Austria. Total housing loans rose by 5.4% in October 2019 from a year earlier, to reach EUR 117.59 billion (US$ 132.09 billion), based on figures from the European Central Bank (ECB).

Yet the economy is slowing. Austria's economy was estimated to have expanded by 1.6% in 2019, lower than the prior year's 2.3% growth, as global economic uncertainty dampened domestic activity, according to the OesterreichischeNationalbank.The Austrian economy is mainly driven by exports, mostly to its biggest trading partner, Germany. The economy is expected to grow by a meagre 1.2% in 2020 and by another 1.4% in 2021, according to the Austrian Institute of Economic Research (WIFO).

There are no restrictions on foreigners buying properties in Austria.

Prices have risen significantly in Vienna, and yields are moderate

For a long time home prices have been rising in Vienna. Result: gross rental yields - the return on investment on a property before all expenses - are no longer good. However, it all depends where you buy.

So yields are at their lowest in District 1 (Innere Stadt). Innere Stadt is Vienna’s most luxurious and least populated district, with roughly 17,000 inhabitants. But with a workforce of around 100,000, it is Vienna’s largest employment locale.

But acceptable yields can be had in districts such as Margereten, Mariahilfen, Favoriten, Hernals, or Leopoldstadt, where apartment costs vary enormously from EUR 3,500 to EUR 5,400 per sq. m.. In these districts, yields range from nearly 5% for very small apartments, to 3-4.4% for large apartments.

So one should choose one's district and size carefully. Since a large apartment is less trouble to manage than a couple of smaller ones, a largish apartment in Favoriten with a yield of 4.3% has attractions, for example.

Apartments are most affordable in Graz, where apartments cost, on average, EUR 3,300 to EUR 4,400 per sq. m. In Graz, rents range from EUR 10.00 to EUR 13.50 per sq. m. per month. Gross rental yields in Graz are slightly better than in Salzburg - ranging from 2.5% to 4.9%. The smallest apartments return the highest rental yields.

Rental Income: Tax rates in Austria are highly progressive, so that owners of larger properties are likely to have to pay heavily, though deductions are available.

Capital Gains: Capital gains realized from properties which were acquired as of 31 March 2002 is subject to capital gains tax at a flat rate of 27.50%.

Inheritance: Inheritance tax is abolished effective 01 August 2008 and will be replaced by an ‘information duty’ to authority or ‘gift reporting tax’.

Buying costs are high in Austria

Total roundtrip transaction costs are high at between 9.40% and 13% of the property value or sales price. Bear in mind that Austrian lawyers charge on a per hour basis, at rates fixed by the lawyers’ association, so that a lawyer’s costs may be proportionately higher for small apartments. It takes about 32 days to complete the three procedures needed to register a property. 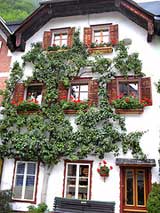 Austrian law is tenant-friendly, with rent control at somewhat below free-market levels.

Austria houses Rent Appeals: Tenants can appeal to a rent tribunal even after they have left the apartment, and reclaim rent ‘overpaid’. However with new rentals, the difference between what the rent tribunal would assess and free market prices is very small.

Tenancy Laws: The two sources of tenancy laws are the “ABGB” (General Civil Code) and the “MRG” (MietrechtsG, TenStatute), of 1982, as frequently amended. It is sometimes difficult to know whether both laws simultaneously apply (flats are covered by the much more restrictive MRG).

“The frequent amendments and its complex regulations make the MRG and the regulations connected to it rather a “dark” discipline which is normally only overseen by lawyers specialized in the field of tenancy law,” notes the EIU Tenancy Law Project Austria survey.

Austria’s economic growth was estimated to have slowed to 1.6% in 2019, lower than the prior year’s 2.3% growth, as global economic uncertainty dampened domestic activity, according to the OesterreichischeNationalbank.The Austrian economy is mainly driven by exports, mostly to its biggest trading partner, Germany. More than 75% of Austria’s exports go to Europe, 30% to Germany.

Unemployment was 4.6% in October 2019, slightly down from 4.9% in the same period last year, according to Statistics Austria. Austria’s jobless rate remains well below the Euro area’s average of 7.5% in October 2019.

Inflation stood at 1.1% in November 2019, unchanged from the previous month but down from last year’s 2.2%, according to Statistics Austria.In fact, it was the lowest level in three years. The European Commission expects Austria’s inflation at 1.5% in 2019 and to 1.6% in 2020.

Caps on refugees, coalition deal between the Austrian conservatives and Greens
Austria was among the EU members with the highest numbers of asylum applicants since 2015, with about 90,000 applications. Vienna took in 43,200 people to reach a total population of 1.84 million. Of the 141,718 registered unemployed in the city, around 58,000 were foreigners, representing a 17% annual increase in the number of jobless foreigners in the city.

Aside from having a direct effect on the country’s unemployment rate, Statistics Austria also reported that more than half of all asylum seekers in Austria commit crimes. More specifically, from 2004 to 2014, almost every other migrant had committed some kind of criminal offence after coming to the country and seeking asylum. The report revealed that about 80% of the criminals were young men. Moreover, a number of suspected jihadis were detained in 2016 after a series of raids in cities across Austria.

The government announced in January 2016 that they would set a maximum number of 37,500 asylum applicants annually in the next four years. The following month, Austria introduced a cap of 80 asylum seekers a day allowed to enter the country to make an asylum application, while 3,200 persons are allowed to transit toward other countries.

The government also revealed a plan to deport about 50,000 failed asylum seekers over the next four years.

In fact in February 2016, the Minister of Interior Johanna Mikl-Leitner announced that the "Balkan route", the main passage used by migrants, commonly from the Middle East, to reach affluent countries to the north, would be closed permanently.

From January to November 2019, the Austrian government recorded just 9,749 asylum applications, according to the Federal Ministry for Home Affairs, sharply down from 12,852 asylum applications in the same period last year, 23,151 two years ago and 39,813 three years ago.

The immigration crisis has had a substantial political impact. In the legislative elections of 2013, the Social Democratic Party (SPŐ) and the Austrian People’s Party (ÖVP) - a Christian Democratic party - emerged with the highest number of seats (27% of the vote and 52 seats for the SDP, and 24% and 47 seats for the People’s Party) and formed a ‘grand coalition’.

However in May 2017 the ÖVP elected a new young leader, the right-wing populist Sebastian Kurz.Kurz had previously called for stricter controls on migrants, and steered through an Islamgesetz (Islam Law) prohibiting the funding of mosques by entities from abroad, paying imams’ salaries, and regulating the version of the Quran that may be used in Austria.

Partly as a result of his leadership the Grand Coalition broke in mid-2017, and a snap election held in October was won by the ÖVP which tool 31.5% of votes and 62 of the 183 seats. The SPŐ was second with 26.9% and 52 seats. The ÖVP disdained its previous socialist partners and formed an alliance with the newly-strong right-wing Freedom Party of Austria (FPÖ) which had finished in 3rd place, receiving 26% of the votes and 51 seats.

The victory of the center-right People’s Party (ÖVP) and the radical right Freedom Party (FPÖ) further strengthened the country’s insistence on restricting immigration and limiting support for immigrants. As Chancellor, Kurz has brought Austria closer to the Visegrad Group, particularly the Eurosceptic and populist governments of Andrej Duda in Poland, Victor Orban in Hungary, and Milos Zeman in the Czech Republic.

As Austria held the EU’s rotating presidency in 2018, Kurz has made curbing unregulated migration a priority not just in the country but in Brussels as well. In fact in October 2018, the Austrian government announced its withdrawal from the UN global migration pact to promote safe and orderly migration (known as the Global Compact for Safe, Orderly and Regular Migration).

However tension between Kurz and his coalition government has increased steadily since it was formed, and the FPÖ’s “Ibizagate” scandal, in which leading FPÖ members were taped agreeing to helping a Russian oligarch with Austrian connections in return for financial support, and revealing contacts with Russian President Putin with a view to forming a "strategic alliance",  causedKurz to be voted out of office in a Parliamentary no confidence vote in May 2019.

During the September 2019 snap election, Kurz’s ÖVP won the most votes of 37.5%. The FPÖ suffered heavy losses while the Greens scored their best-ever result, receiving 13.9% of votes, amidst growing calls for urgent action on climate change. In January 1, 2020, Kurz struck a coalition deal with the Greens to ensure his return to power and bring the left-wing party into government for the first time. The Greens will control 4 of 15 ministries.

Where to buy property in Austria