Property in US Virgin Is.

Financial Overview: Property in US Virgin Is.

After taking a temporary setback from the 2017 hurricanes, US Virgin Islands' housing market is now growing strongly again. “We are as busy as we were the day before the storm hit,” said Chris Hanley of Chris Hanley Real Estate on St. Croix.

“The market has been very, very, very strong,” confirmed April Newland, a St. Thomas-based realtor. “A lot of people have been buying.”

In St. John, where most luxury residential properties can be found, the average home sales price rose by 11.5% y-o-y in 2019, to approximately US$1,169,878, according to Cruz Bay Realty, Inc. This follows a 17.7% price surge in 2018, and a 14.4% decline in 2017 mainly due to the devastation brought by the Hurricanes Maria and Irma to properties in the area during the year.

In St. Thomas, where the USVI's capital Charlotte Amalie is located, the average home sales price surged by 27% y-o-y in the first eight months of 2019 to US$ 666,577, based on figures from Re/Max Team San Martin. In contrast, condo prices fell slightly by 1% to US$ 250,208 over the same period.

There are no restrictions on foreign property ownership. Owning a property in the US Virgin Islands is &quot;fee simple&quot;.

Analysis of US Virgin Is. Residential Property Market »

Prices have fallen significantly over 4 years - now for the rebound?

Unfortunately, data on long-term rentals is too scarce to allow us to estimate rental yields.

Property transaction costs are reasonable in US Virgin Islands, by the admittedly expensive standards of the Caribbean.

US Virgin Islands taxes are low

Inheritance: Foreigners and non-permanent residents of the United States are not subject to inheritance taxes in the US Virgin Islands.

Residents: US citizens and US permanent residents living in the islands are taxed on their worldwide income.

Buying costs are moderate in the US Virgin Islands

Roundtrip transaction costs range from 10% to 14.6% of property value. The transfer tax ranges from 2% to 3.5% depending upon property value. The real estate agent's fee, at around 6%, accounts for the greater part of the costs. Legal fees are at 1% to 2%.

US Virgin Islands law is pro-tenant 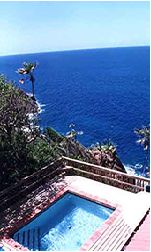 Rent Control: Rents in the US Virgin Islands are frozen at their 1947 level be the Rent Control Act.

Tenant Security: For reasons other than rent default, the landlord must give the tenant a month’s notice of termination and must apply for a court approval prior to evicting the tenant. If the landlord is given the right to repossess the property, the tenant can delay the eviction for up to six months to give him ample time to look for alternative housing.

The US Virgin Islands is composed of three main islands: St. Croix, St. John, and St. Thomas. The archipelago is an unincorporated US territory. Most federal laws apply, though customs policies differ.

Island belongers are considered American citizens and enjoy all the benefits and rights of this status. They are represented in the US House of Representatives, but not in the Senate, and are not allowed to participate in US presidential elections. But the Island government acts with relative autonomy.

St. Croix is the southernmost and the largest of the three islands. It has many isolated beaches, dense forests, and fertile lowlands. It used to be one of the region’s wealthiest islands, with a multitude of sugar plantations and a successful slave trade. Colonial ruins lie amidst the beautiful scenery.

St. John, on the other hand, is the smallest and most serene. Two-thirds of the island is a protected National Park that is a favored tourist destination. There are about 40 beaches to relax in and numerous water sports to enjoy.

St Thomas is the most developed of the US Virgin Islands. St Thomas’ capital, Charlotte Amalie, is the commercial center of the territory. Every year, more than a million cruise passengers alight in the harbor to tour the towns and indulge in duty-free shopping.

Tourism remains weak last year, with visitor arrivals totaling less than 1.8 million people in the first eleven months of 2019. About 68% were cruise passengers while the remaining 32% were air arrivals. This signals that the industry is yet to fully recover from the adverse impact of hurricanes Irma and Maria that hit the island in September 2017.

In January 2020, the government launched a new marketing campaign for St Croix with the tagline “St. Croix: a vibe like no other”, in an effort to revive the industry. The strategy’s focus is on digital and social media, such as Spotify, Pandora, Facebook, Instagram and Twitter. St. Thomas and St. John will continue to be promoted under the overarching USVI banner.

GDP figures for 2019 are still unavailable. While the economy already seems to be picking up, it is still facing uncertainty mainly due to ongoing trade tensions, global economic slowdown and the outbreak of the 2019-nCoV. In 2018, USVI’s economy grew by 1.5%, after contracting by 0.6% in 2017 and posting miniscule growth of 0.9% in 2016 and 0.3% in 2015, according to the U.S. Bureau of Economic Analysis. The growth was mainly driven by post-disaster recovery activities.

Where to buy property in US Virgin Is.