India's housing market remains weak. Homes sales and residential construction activity continue to fall. Except for Hyderabad, which registered an impressive double-digit price growth during the year to Q2 2019, prices have been largely flat in other major cities. In addition, India's economic growth is flagging, undermining its arguably overvalued property market.

During the year to Q2 2019, according to PropTiger:

Residential construction activity is falling. In Q2 2019, only 37,852 housing units were launched, down 47.4% from a year earlier. Except in Gurugram, new launches fell across all other cities in Q2 2019.

Demand is also depressed. In Q2 2019, home sales in India's 9 major markets (including Ahmedabad, Bengaluru, Chennai, Gurugram, Hyderabad, Kolkata, Mumbai, Noida, and Pune) fell by 10.8% to 71,957 from the same period last year, according to PropTiger.

“Home sales may see some improvement in the times to come with the Reserve Bank of India lowering repo rate to record low,&quot; said PropTiger. &quot;Banks have also been lowering interest rates to pass on the benefits of policy transmission among homebuyers.”

“In the recently announced Budget, the government has also increased the deduction on the home loan interest component to Rs 3.50 lakh on affordable housing. This would also trigger fresh demand for affordable homes. As a result of renewed sales activity, inventory stock would also decline.”

Moreover property cannot be purchased jointly in the name of one eligible person with one non-eligible person. That means a non-resident Indian (NRI) or foreign national of Indian origin (PIO) cannot buy a property jointly with a foreigner.

Residential property prices have risen strongly in India in recent years (see our home price charts for India). Rents have not kept pace, so it is hardly surprising that the gross rental yield - i.e., the percentage return on your purchase of property - is low in India's major cities.

South Mumbai has very low rental yields, with property investors earning around 2.40% gross. Apartments remain expensive, at about US$10,900 per square metre (sq.m.) for 120 sq.m. apartments, making Mumbai the world's 13th most expensive city for the property buyer. It is unlikely that after costs and depreciation a property buyer will make any return on his property.

Conclusion: Indian gross rental yields are very low. This suggests that Indian residential property is somewhat overvalued. While low rental yields do not always indicate over-valuation, especially in periods when interest rates are low, they are only justified if rapid economic growth is expected, and also, if there are sufficient restrictions on new building to prevent the market being flooded with new properties as prices rise. The buyer must ask himself whether these two conditions are met in India.

Rental income tax is low to high in India

Rental Income: Net rental income is taxed at progressive rates, from 10% to 30%.

Inheritance: No inheritance or gift tax is levied in India. But a wealth tax of 1% is imposed if the net wealth exceeds INR10 million (US$147,059).

Residents: Residents of India are subject to tax on their worldwide income at progressive rates, from 10% to 30%.

Buying costs in India range from low to high

Total roundtrip transaction costs, i.e., the cost of buying and selling a property, are between 8.75% and 15%. Stamp duties and registration fees vary according to city and locality. 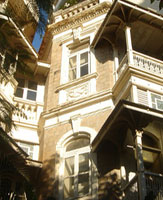 Rent Control: For Delhi, the maximum annual rent is 10% of the cost of construction and the market price of the land. But both construction cost and land price are based on historical values, not on the property's current market value.

Tenant Security: It is difficult for a landlord to protect his property from unwanted overstaying tenants. Though contracts may be enforceable in the courts, the enforcement process is likely to take years, or even decades.

In the fiscal year ending in March 2019, the Indian economy expanded by 6.8% - the lowest growth for five years. Likewise, the country’s annual growth rate in the most recent quarter slowed to 5.8%, the lowest in more than four years and the first time that India’s quarterly growth trailed that of China in two years.

The auto industry’s predicament is an example of the effect of this slower growth.  In June 2019, car sales fell by almost 16%, and some manufacturers shut their production lines due to low demand for vehicles.

In May 2019, Narendra Modi won a dramatic second landslide election, returning him for another five-year term as India’s prime minister, giving a convincing mandate to his Hindu nationalist Bharatiya Janata Party (BJP).

But aside from addressing the flagging economy and rising unemployment, PM Modi is now confronted with questions about whether economic growth in his first term was nearly as strong as official figures claimed. This is because in June 2019, Arvind Subramanian, a former IMF staffer and Modi’s ex-chief economic adviser, authored a Harvard paper claiming that India’s GDP growth was considerably lower than the official figures showed. Based on Subramanian’s estimates, India’s economy grew by an average of 4.5% between 2012 and 2017, not the above 7% average growth that the official figures suggest. For instance, he questioned India’s GDP growth rate of above 7% in 2016 after the government’s chaotic move to pull all high-denominated currency bills out of circulation. Lending credence to his argument, Subramanian has pointed out that no country has grown over 7% with exports growing below 5%.

India’s unemployment rate is now at record high. During FY2018, the nationwide jobless rate rose to 6.1% - the highest since 1972-73, the earliest year for which comparable data is available. Over the same period, urban unemployment stood at 7.8% while rural unemployment was 5.3%, according to the Periodic Labour Force Survey (PLFS) of the National Sample Survey Office (NSSO). The youth (aged 20-24 years), who constitute about 40% of India’s labour force, have an unemployment rate of 32%.

India will have 18.9 million jobless people this year, according to the International Labour Organization (ILO). Recently, the World Bank estimated that India needs to create 8.1 million jobs every year to maintain its employment rate, which has been declining.

Where to buy property in India

In Mumbai, homes can be won in a game of lottery