Real incomes have virtually stagnated in Hong Kong for years. But house prices have tripled from 2003 to 2015.

Housing demand has been propelled by a combination of stringent government regulations on development, low interest rates, and currency stability; while the supply of land, which the government controls, continues to diminish. The latest house price rises come despite the government raising stamp duties for all non-first time homebuyers starting November 2016 and cutting the amount of allowable loans on residential and commercial properties in May 2017.

Hong Kong's economy grew by 3.8% in 2017, sharply up from 2016’s 1.9% growth and the fastest pace since 2011, amidst rising exports, strong domestic demand and rebounding tourism. The economy is expected to expand between 3% and 4% this year, according to Paul Chan, HK’s finance secretary.

Hong Kong's property market is in a select band of cities where gross rental yields - the percentage return to owners on renting out their property - is only just above 2%. Effectively, this means that landlords are unlikely to make any profit on their apartments, once empties, administration costs, cleaning and repairs, and other costs are taken into account. Or, if not nothing, then very little. Other such cities are Monaco and Taipei.

Hong Kong is not a ‘typical’ market. It is a place where the rich choose to park assets in the form of apartments, as part of a diversified asset-safeguard strategy - like Monaco and Singapore. Such markets typically have lower rental yields than more ‘normal’ housing markets.

Rental income tax is in middle range in Hong Kong

Rental Income: Net property income is taxed at 15% (previously 16%). Net income is computed by deducting a standard 20% for repairs and outgoings from the assessable value (gross rent less irrecoverable rent and rates paid by owners).

Inheritance: Inheritance tax or estate duty was abolished from 11 February 2006.

The total roundtrip transactions costs of buying and selling an apartment are high. There is a special stamp duty (SSD) at varying rates, from 5% to 20%, depending on the holding period of the residential property. Property held for longer than 36 months will not be subject to SSD. There is also buyer’s stamp duty BSD) at a flat rate of 15% on all residential properties acquired as of 27 October 2012.

Landlords have an easy life in Hong Kong.

Rents: Rents can be freely negotiated in the private sector, which comprises about half of the rental market.

Tenant Security: The Landlord and Tenant (Consolidation) Ordinance 2004 removed security of tenure, i.e. domestic tenants no longer have the statutory rights to renew their tenancy at prevailing market rates. 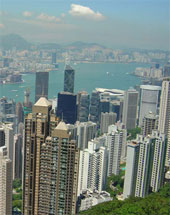 The economy is expected to expand between 3% and 4% this year, according to Paul Chan, HK’s finance secretary.

HK’s headline inflation rate is projected to rise to 2.2% this year, according to finance secretary Chan.

Where to buy property in Hong Kong

Asia's most expensive apartments sold for $149 million in Hong Kong

Restrictions on property market to stay in Hong Kong