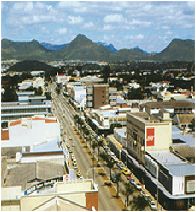 Following contentious parliamentary elections in early 2005, the security situation is tense. Political repression, corruption, and economic mismanagement have worsened throughout the rule of Prime Minister Robert Mugabe, who came to power in 1979 after a war of liberation. His Zimbabwean African National Union - Patriotic Front (ZANU-PF) dominates politics, and has largely cowed the opposition Movement for Democratic Change (MDC), established in 1999.

Although endowed with natural resources, Zimbabwe suffers from a high degree of government intervention, inappropriate economic policies, and corruption. Skewed income distribution along racial lines is a major social issue. In line with this, the Government initiated a controversial land reform program in 2000, seizing white-owned agricultural land to benefit black farmers. The commercial farming industry has suffered as a result, and generally the economy is now in ruins.

Land ownership rights risk being abolished by the government.

Rental Income: Rental income earned by nonresidents is taxed at progressive rates, up to 50%.

Inheritance: Estate duty is levied at a flat rate of 5%.

Residents: Residents are taxed on their Zimbabwe-sourced income at progressive rates, up to 50%.

Buying property costs are quite low in Zimbabwe

Buying property costs are quite low at 5.60% to 8.60% in Zimbabwe. The notary fees are around 4%, plus 15% Value Added Tax (VAT). Stamp duty is levied at progressive rates, from 1% to 4%, depending on the property value.