Ghana's housing market is gaining momentum, as its economy booms

After years of lacklustre growth, Ghana's housing market is now gaining momentum, boosted by strong economic growth, and the influx of non-resident Ghanaians and foreign homebuyers, according to local real estate experts.

“Ghana's economic growth and increasing supply of prime real estate assets make it one of Africa's most interesting markets for investors,” said JLL. “The capital, Accra, is well placed as a hub for business and travel in West Africa and we expect a pick up in the real estate market to reflect that in the mid-term.”

Ghana is predicted to become the world's fastest growing economy this year, with an estimated GDP growth of 8.8% - double the pace of the emerging economy average and well ahead of world growth, according to the International Monetary Fund (IMF).

Demand is stable, especially in the high-end market. Based on figures from Broll Ghana, there have been about 85,000 residential property transactions, for both sales and rentals every year, over the past decade.

Ghana has seen a steady stream of European and American passport holders of African descent arrive at Kotoka International airport in recent years, as a response to the country's resource boom and strong manufacturing growth. They collect their possessions from shipping containers at Tema port and search for homes in Accra's popular residential areas. They come for what seem like the limitless opportunities in what has often been seen as one of Africa's best-run countries. Ghana's mining sector, specifically gold mining, has witnessed a massive influx of multinational mining companies – increasing the demand for expat accommodation further.

Accra, the capital, has undergone major transformation, witnessing a number of luxury gated villa developments, high-end apartments, western styled retail developments, and five-star hotels over the past decade, according to Broll Ghana. Currently, prices for fully-furnished three-bedroom houses in Accra range from US$100,000 to US$500,000 – about 15% higher than in rest of Ghana.

Penthouses and townhouses are the most expensive property types in Accra, with their sales prices ranging from US$450,000 to US$2.5 million in the first half of 2019, according to Broll Ghana. For high-end apartments, the average sales price currently ranges from US$85,000 to US$620,000.

JLL warns that Ghana remains a relatively risky prospect for investors. “The primary risks for all African investments are currency weakness which stems from poor fiscal management by the government and an over-reliance on the export of commodities to support fiscal buffers,” said Tom Mundy of JLL EMEA.

There are no restrictions on foreigners buying property in Ghana. However, there are four forms of land ownership, some of which cannot be privately owned. Each involves differing modes of acquisition. These are: Government Land, Vested Land, Customary/Stool Land, and Family/Private Land.

Potential buyers should first consult the Ghana Investment Promotion Center regarding procedures, and to be directed to the appropriate agencies involved in legally acquiring property, since identifying legal ownership can be a problem.

Rental Income: Rental income earned by residents from leasing residential properties is subject to a final withholding tax of 8% levied on the gross rent.

Inheritance: No inheritance tax is levied in Ghana. However, a 15% gift tax is imposed on the transfer of properties (or any right or interest in such) by way of gift.

Residents: Residents are taxed on their worldwide income at progressive rates, from 0% to 25%.

Ghana has a complicated titling system 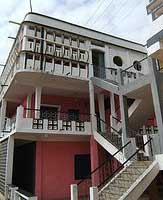 Total round-trip transactions costs, i.e., the cost of buying and selling a property, range widely from 8.25% to 16% of the property price, due to the multiplicity of land titling issues. The seller pays the 5% real estate agent’s commission. The buyer pays the stamp duty ranging from 0.25% to 1%, and legal fees ranging from 3% to 10%.

Real estate transactions are negotiated and concluded in Ghanaian Cedi (GHC). English is the official language. 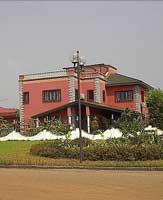 Rent: Rents can be freely negotiated and rent increases are unrestricted. In practice, a landlord charges one to three years rent in advance, though according to the Rent Act, landlords can only charge six months rent in advance, with succeeding rental payments due every six months.

Pre-termination of Contract: If the tenant wishes to pre-terminate a contract, he must inform the landlord three months in advance. In most cases, the tenant must look for someone to take over the lease for the duration of the contract or wait for the repayment for months.

Ghana to become the world’s fastest growing economy in 2019

Just a few decades ago, Ghana was in deep economic crisis, impoverished and suffering famine. Fast-forward today, Ghana is now hailed as a model for African growth and is predicted to become the world’s fastest growing economy in 2019, with a projected GDP growth of 8.8% - double the pace of emerging economies and well ahead of world growth, according to the World Economic Forum.

Ghana’s strong growth in recent years is primarily driven by its top three main export commodities – oil, cocoa, and gold. It is aided by the government’s various reforms, including trade liberalization, price deregulation, privatization, and the elimination of exchange rate distortions.

The cedi is expected to firm up during the remainder of 2019, amidst increased foreign reserves. Ghana’s gross international reserves (GIR) rose from US$7 billion in December 2018 to US$8.2 billion in August 2019 (equivalent to 4.1 months of import cover), thanks to the country’s US$3 billion Eurobond issuance in March 2019 – the largest ever in Ghana’s history.

Ghana exited a four-year extended credit facility program with the IMF in April 2019, pledging to maintain fiscal discipline. The government raised US$3 billion in Eurobonds in March 2019.

Despite these improvements, Ghana (pop. 29.6 million, GDP/cap US$2,200) remains a very poor country. Formerly known as the Gold Coast, it was the first country in sub-Saharan Africa to gain independence from Britain in 1957.

After independence there was a long power struggle, after the socialist one-party state established by independence leader Kwame Nkrumah was followed by a series of military coups. Jerry Rawlings overthrew the government in 1979, and gained popularity by instituting price controls. He moved the country towards an increased role for the private sector, relinquished power to an elected government headed by President Hilla Limann (1979-81), but soon overthew Limann. He then abolished the constitution, suppressed dissent, and established a program of self-sufficiency and austerity, while surviving four coup attempts. He won free presidential elections in 1992 and 1996, serving until 2001.

In the presidential election of 2000, Rawling's National Democratic Congress sponsored John Atta-Mills, but he was narrowly defeated by the conservative New Patriotic Party, whose candidate John Kufuor became president in 2001. The economy had expanded under Rawlings, averaging 4% annual GDP growth from 1992 to 2000. The recovery of global gold and cocoa prices (the country’s major export commodities) helped in the early 2000’s. But it was Kufuor's government which was highly successful, bringing economic growth, halving the level of poverty, introducing free medical care and free meals in schools.

When Kufuor gave up power in 2008 the National Democratic Congress' John Atta Mills won the election. But in 2012 Mills died and power passed to his vice-president John Dramani Mahama, who won the 2012 election.

In the December 2016 presidential elections opposition leader Nana Akufo-Addo beat Mahama, tapping an electorate fed up with a faltering economy and ready for change.

The next presidential and parliamentary elections will be held in December 2020.

Where to buy property in Ghana